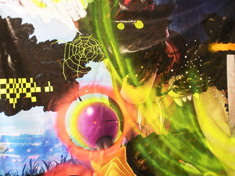 “To explore strange new worlds, to seek out new life and new civilizations, to boldly go where no man has gone before” Captain Kirk’s iconic phrase from the Star Trek TV series is not too distant from the territories touched on in Judy Darragh’s latest body of works.

Known for her bright and playful objects and installations that combine the stuff we use every day, Darragh’s new works incorporate symbols from 1960s and 70s sci-fi art such as glowing orbs, radiating beams of light and pixellated interference, to build her own vision of the universe. Painted on large digitally printed PVC movie posters these works blend Darragh’s low-fi techniques with computer generated images of the future populated by alien newlyweds and soldiers trapped in unknown battles.

The opening event for this exhibition is the Wrap Party for the Spark International Festival and will include a re-staging of Plant – an outdoor installation resembling a glowing fluro garden and will also be a preview of a documentary about Judy’s recent projects including SCI FI and Plant produced by Alison Ewing & Kate Darrow in partnership with the University of Waikato and made possible with the support of Wintec.