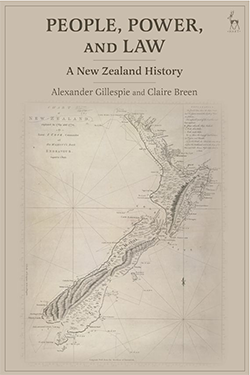 This book offers a unique insight into the key legal and social issues at play in New Zealand today. Tackling the most pressing issues, it tracks the evolution of these societal problems from 1840 to the present day.

Issues explored include: illegal drugs; racism; the position of women; the position of Maori and free speech and censorship. Through these issues, the authors track New Zealand's evolution to one of the most famously liberal and tolerant societies in the world.

"People, Power and Law represents the definitive guide to a New Zealand history, mapping the way society and governments have dealt with the many challenges and issues our nation has encountered on a path to evolving into a liberal multicultural and progressive nation. I would recommend it to anyone that wants both a fascinating read and an accurate summary of our nation's journey."
Sir John Key, Prime Minister of New Zealand, 2008-201

"This book will prove to be an invaluable resource for those interested in the progression of law and policy in New Zealand."
The Right Honourable Helen Clark, Prime Minister of New Zealand, 1999-2008

"A brilliantly detailed chronology and commentary on major events impacting on 'the New Zealand we are today'. Insightful, informative, and challenging this book reminds us that every generation of Leader must lead in the context in which they find themselves."
Dame Jenny Shipley, Prime Minister of New Zealand, 1997-1999

"People, Power and Law adds to the story of who we are as a people and the journey we have travelled to our current physical and emotional position which is essential knowledge as we face a different world tomorrow."
The Right Honourable Jim Bolger, Prime Minister of New Zealand, 1990-97

"Policy, law and politics change over time. Often it is hard to get a perspective on how much, in what respects, and why. This work provides an accessible kaleidoscope for New Zealand developments over a long period. This book will help people to navigate through some of the more nuanced messages from the New Zealand experience."
Sir Geoffrey Palmer, Prime Minister of New Zealand, 1989-1990

"Anyone who aspires to a political or policy-making role in New Zealand must understand the consistent and overlapping concerns that have led to the development of legislation, rules and public policy.  Reaching back over more than 150 years (even pre-1840), this important book provides that context."
Sir Jim McLay, Deputy Prime Minister of New Zealand, 1984

"The authors, in their unique approach to the story line, have woen their knowledge through a lens of many shades - from a peoples' perspective, in a language that all New Zealanders can appreciate. ...In Māoridom we say, "we look to the past to better understand the present, so that we are better prepared for the future." To those that fail to acknowledge the past, they are destined to repeat the mistakes."
Sir Tumu Te Heuheu Tūkino VIII, Paramount Chief of Ngāti Tūwharetoa.