Justice in the Round
Perspectives from Custom and Culture, Rights, and Dispute Resolution 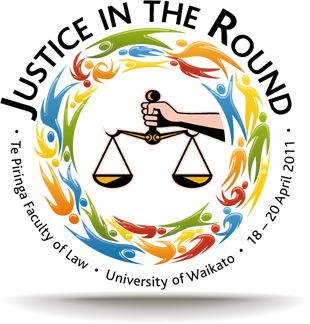 Te Piringa - Faculty of Law at the University of Waikato is hosting the 'Justice in the Round Conference', 18-20 April 2011, in Hamilton. As the title suggests, the goal of this conference is to further a dialogue about justice perceived from a number of perspectives, and about contemporary efforts being made to justly balance the interests of all parties.

The goal of this international conference is to further a dialogue about what constitutes justice in the round. It is also aimed at providing an environment in which the nature of justice, as perceived from the perspectives of custom and culture, rights, and dispute resolution, can be considered; and in which contemporary efforts to administer justice in the round by striking a just balance between the interests of all parties, including the hidden parties to any proceedings or decision-making process, can be identified and critiqued. The conference is therefore designed to draw together legal scholars and practitioners, whose consideration of the concept of justice may be informed by custom and culture, rights and dispute resolution, and to facilitate a more comprehensive understanding and implementation of the multiple facets of what may be understood as 'Justice in the Round'.

The conference theme is derived, in part, from aspects of the three founding goals of Te Piringa - Faculty of Law. These goals are the understanding of law in its contexts; developing bicultural legal understandings; and fostering professionalism in students. In reflecting the Faculty's commitment to biculturalism, the conference aims to facilitate achieving this as a goal in its own right, as well as an important cornerstone for New Zealand's unique identity in an increasingly multi-cultural society. In affirming the Faculty's commitment to law in context, the conference aims to gather a group of people already 'working for justice', to consider 'justice' and conceptions of justice in the institutional, ideological, and cultural contexts in which they are currently situated, and to consider how both the ideas and their realization in fact, might be improved or redesigned.

We regret to advise that two of our keynote speakers, Mr. Phil Fontaine and Justice Murray Sinclair, have had to cancel their trips to New Zealand to participate in the Justice in the Round Conference, due to personal reasons beyond their control. Te Piringa - Faculty of Law is naturally disappointed by this development; however, it understands the circumstances that prevent their ability to participate in our Conference. We are pleased to announce, however, that they have been replaced in the programme by excellent speakers. The distinguished Métis scholar, Paul Chartrand, who was a Commissioner of the Royal Commission on Aboriginal Peoples of Canada, will replace former National Chief Fontaine on the Monday morning plenary session. Ms. Sylvia Bell, Principal Legal and Policy Analyst of the New Zealand Human Rights Commission, has replaced Justice Murray Sinclair on the Tuesday afternoon Plenary Panel. We are looking forward to your participation in what promises to be an exceptional conference.

The conference committee are particularly interested in having postgraduate participation in the conference.

Postgraduate students wishing to attend the Justice in the Round Conference are invited to apply for scholarships sponsored by the New Zealand Law Foundation. The scholarships are open to any postgraduate law student enrolled in a New Zealand university, and are awarded on the basis of merit through a process of application to the conference organisers. Up to 4 scholarships will be awarded to each of the following regions: Auckland, Victoria, Otago, Canterbury and Waikato. The Scholarship comprises of a 3 day student conference registration and travel grant.

The value of the grants are:

Interested applicants are invited to submit an application that includes a letter of recommendation from a member of academic staff familiar with the student and their work. Applicants are also encouraged to submit an abstract, which can be submitted with your sponsorship application letter. Further details on the conference can be found at http://www.waikato.ac.nz/go/JITR.

All applications should be emailed to the conference committee at [email protected]. The closing date for applications is Thursday 7th April.

Te Piringa - Faculty of Law are pleased to acknowledge the support of our sponsors:

Jana Rowlands
[email protected]
or register on the day.