Snake Robot to the rescue 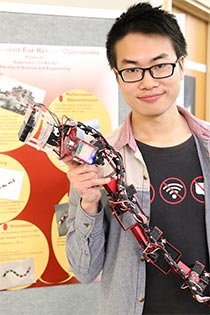 University of Waikato Master of Engineering (ME) student Pinwei Jin has designed and built a remote control robotic snake, which he hopes will be used in the future for rescue operations.

“Earthquakes and other natural disasters happen frequently in New Zealand and when it comes to the big ones, many lives could be saved if search and rescue operations were conducted more effectively and efficiently,” says Pinwei.

Differing from the existing mobile rescue robot systems currently in the market place, he says his Snake Robot provides the flexibility of movement needed in cluttered and irregular environments created by disasters.

“The Snake Robot features a wireless camera on its head and is controlled by a wireless joystick to move forward, backwards, left and right. It has 16 degrees of freedom from the eight joints, nine segments, 16 motors and nine passive wheels. Essentially it can move along the ground like a snake.”

Pinwei attended high school in a small town in central China. After completing a Bachelor of Engineering at Wuhan University of Technology in China, he heard about the University of Waikato from friends and based on the University’s reputation, decided to enrol.

Pinwei is in the final stages of an ME in Mechanical Engineering supervised by engineering lecturer Dr Chi Kit Au. His prototype was on show recently at the University of Waikato’s Carter Holt Harvey Pulp & Paper Engineering Design Show.

Snake Robot to the rescue is licensed under a Creative Commons Attribution 4.0 International License.