What are the limits of dissent as NZ locks down, vaccinates and prepares to ‘open up’? 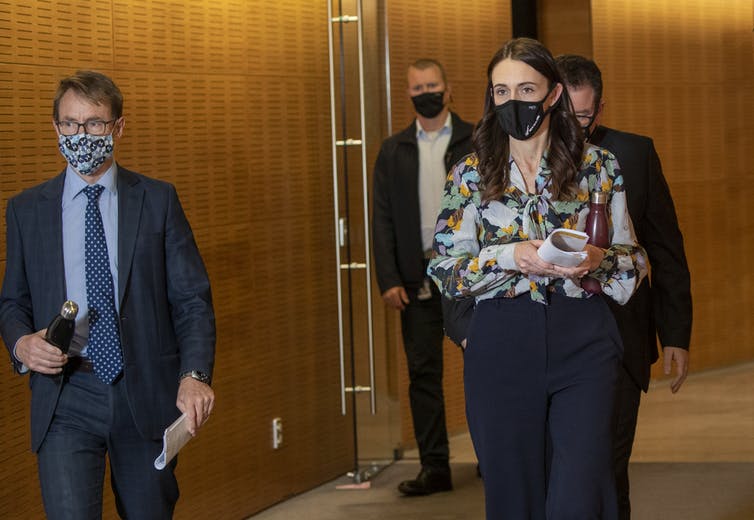 As New Zealand grapples to bring a Delta outbreak under control and to accelerate the vaccination rollout, social cohesion is vital for a successful elimination strategy.

Political consensus on elimination has endured so far. Unlike the anti-mask and anti-vaccination movements elsewhere, most New Zealanders continue to back the prime minister’s decision to place the country under the strictest lockdown.

But strains on public consensus are beginning to show, with a less-than-ideal parliament, some pushback against lockdowns and agitation to “open up”.

These debates will become more pressing as the government moves towards difficult discussions about an exit strategy and targets for vaccination rates.

Dissent and debate within parliament

At the highest level, the country has been let down by all sides.

During last year’s nation-wide lockdown, the prime minister created the epidemic response committee. It reflected a government confident enough to be questioned in public through a parliamentary body it did not control. The opposition was constructive in finding the best ways forward. This was constitutional governance at its best.

This time, all sides of the political spectrum have failed. It began with the decision to suspend the parliamentary sitting, on the advice of the director-general of health. Any such advice should have been given in conjunction with the attorney-general, as it has significant constitutional consequences.

The epidemic response committee was not resuscitated. Following a wave of criticism, the government floated a virtual option. Opposition parties rejected this, forcing the government to recall a truncated parliament with enhanced social distancing rules.

As a result, very few politicians are in parliament; and smaller parties are staying away for health (not constitutional) reasons. This is a poor example of how our country should be governed in at a time of emergency.

Dissent in the wider community

Dealing with protests outside parliament during this pandemic is equally difficult.  The important point here is that people have rights, but these rights may be subject to reasonable limits.

All New Zealanders have a right to peaceful assembly in public to protest, but this can be curtailed by conditions of where, when and how. Fundamentally, nobody has a right to public protest in the middle of a national lockdown.

Other rights, such as freedom of expression, remain intact, pandemic or not. However, this too is not without limits. For example, advocacy is permissible in a speech about vaccination in a public space, but it cannot be misleading or factually incorrect.

The above examples generally relate to situations in which a minority group is trying to influence the majority view. But the debate gets more complex when the majority tries to make smaller groups do things they disagree with.

Compulsion and harm to others

Vaccination is likely to bring this issue to a head. The government has released a plan for a phased border opening, based on its elimination strategy. The plan would eventually allow vaccinated travellers from low-risk countries to enter without quarantine.

While Australia and other countries are now discussing how to adapt to an ongoing presence of COVID-19, accepting deaths and hospitalisations, New Zealand so far maintains elimination as a strategy “to stamp out the virus and keep our options open”.

Whatever vaccination target will be necessary, getting there from the current level of 21% of the population fully vaccinated will be a challenge. The government will likely need to use incentives and some degree of compulsion.

Read more:
What rights do NZ children and their parents have when giving consent to be vaccinated?

Free vaccinations, if delivered conveniently and safely as part of a targeted public health education campaign to overcome vaccine hesitancy, are an effective tool. Lowering the age for vaccinations will also lift the overall percentage of uptake. If all else fails, even cash incentives may help to increase voluntary vaccination.

But compulsion might become necessary. While the general rule is that people can refuse medical treatments, in times of emergency this can be trumped and regulations could be introduced to enforce vaccination. This is where we must be careful. The temptation will be to use compulsion or heavy-handed pressure (such as restricting social welfare) against those who choose not to get vaccinated.

So far, the government has only introduced law to make it mandatory that certain workers, such as those at the border, are vaccinated. This is done to reduce the risk to others, and it is the correct measure to use.

If people choose not to be vaccinated and risk harming others, the government should intervene, explaining the risk the unvaccinated pose, apart from their potential self-harm. It should then pass laws to allow reasonable levels of discrimination against people who refuse the vaccine.

This means if a risk of harm to others can be shown, it may become acceptable to stop unvaccinated people from entering restaurants, but not from buying food from a supermarket (although strict safety measures may be insisted upon). Conversely, if an unvaccinated person risks harming only themselves, the government should let them carry the full consequences of their choice.