Many European settlers, without any formal controls or legal system, engaged in unruly behaviour (drunkenness, brawling, prostitution and worse) leading some of the Northern Māori chiefs to ask the British Crown to intervene and control her subjects.

This request, along with a threat of French colonisation, led to the appointment of the first British Resident, James Busby, and adoption of the 1835 Declaration of Independence.

The Declaration of Independence is very important when considering te Tiriti as it establishes Māori intent and provides a contextual background. 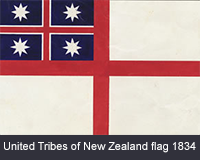 Busby was keen to find a way of uniting Māori tribes and establish New Zealand as a nation with its own parliament and judicial system. The Declaration was an attempt at this.

Māori saw it as a means of ensuring on-going trade with Britain, providing protection from the aspirations of other European nations (notably the French) and getting the British Crown to control her subjects.

The Declaration was signed by 35 Northern Chiefs on 28 October 1835.

Read the Declaration of Independence here.

The Declaration was drafted by Busby and translated by Henry Williams, a methodist missionary. The actual words used by Williams in the Declaration are important when looking at the Māori version of te Tiriti o Waitangi:

The Declaration has special significance for Tainui as it was signed in 1837 by their chief Te Wherowhero who, when asked to later sign te Tiriti, stated "I have already signed my treaty" so was not party to the later agreement.

Clause 3 of the Declaration was never enacted. Inter iwi and hapu conflict continued to stand in the way of political unity, so the hereditary chiefs never met in congress each autumn, but the intent of the document is clear - Māori rangatira would retain all their existing powers and rights. Mana was the word used to best express this.

The Declaration sought to establish New Zealand as an independent nation (necessary to be able to engage in international trade) and asked to become a British protectorate. It was acknowledged by the British Colonial Office who promised to protect the Māori people as long as it was 'consistent with a due regard to the just rights of others and to the interests of His Majesty's subjects'.