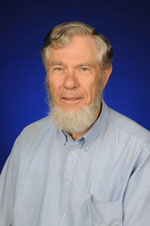 I am interested in the broad range of the distribution and behaviour of naturally occurring isotopes (stable and radioactive) and major and minor elements at the earth’s surface. A number of specific topics arise from these interests including:

(i) Palaeoclimatic and oceanographic studies using carbon, oxygen and uranium series isotopes. The stable isotopes of oxygen are fractionated as water is distributed between the ocean, ice sheets and fresh water bodies, and have also a temperature dependant fractionation between water and calcium carbonate. These are exploited by measuring the changes which occur in microscopic remains of marine organisms deposited from the ocean and recovered from cored sediments. Carbon isotopes are used to identify the water masses in which these organisms lived, with naturally occurring radioactive isotopes used to tell the age of the sediments. These studies are being concentrated on mapping the oceanic climate in the south west Pacific at key time intervals during the past 150,000 years.

(ii) Closely related to the palaeoclimate studies are glaciological studies in New Zealand, Antarctica and South America. Alpine glaciers respond very rapidly to changing climate, and where these flow into wet humid climates, their sediments include much carbon containing material which can be used to date the advances of the glacier. In association with glaciologists from several countries we are attempting to determine how rapidly the climatic signal which drives the major glacial advances is transmitted around the earth. To date our measurements show that northern and southern hemisphere glaciers respond within 50 years of each other, which is far more rapidly than heat can be transported through the ocean-atmosphere system.

(iii) The geochemistry of natural waters. I am interested in what determines the composition of major and minor elements and natural abundance isotopes in natural waters. This includes contributions from weathering, interactions with biological systems and anthropogenic effects.