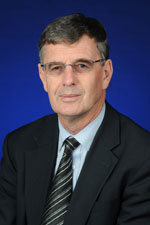 Professor Bruce Clarkson is the University of Waikato's Deputy Vice-Chancellor Research. He is recognised as one of New Zealand's foremost authorities on ecological restoration. He currently leads an MBIE funded research programme People, Cities and Nature: restoring indigenous nature in urban environments. His research has had a direct impact on Hamilton gully restoration initiatives and the Waiwhakareke Natural Heritage Park project near Hamilton Zoo. In 2005, together with independent consultant Dr Wren Green, he carried out a review of progress on the New Zealand Biodiversity Strategy for the chief executives of the sponsoring government agencies. In 2006 he was awarded the Loder Cup, New Zealand's premier conservation award and in 2016 he received the RSNZ Charles  Fleming Award for environmental achievement. Professor Clarkson is a board member of the Australasian chapter of the International Society for Ecological Restoration, on the Governance Group for the Building Better Homes, Towns and Cities National Science Challenge and is ambassador for the New Zealand's Biological Heritage National Science Challenge.