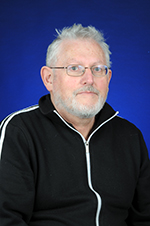 Educated in New Zealand and the USA, Dr Lealand has been part of Screen and Media Studies (formerly Film & Television Studies) during its most vigorous time of expansion, and has been an integral part of its steady growth--through teaching, research and publication output  for more than two decades.

His teaching and research activities are centred on television studies and audience research, issues of media and cultural identity, writing for the small screen, journalism training, world cinema, media literacy and teacher training, research methods,  and children's and adolescent's use of media. His website Cinemas of New Zealand, dedicated to the art house/independent sector in New Zealand, can be found at  http://cinemasofnz.info.

He is interested in writing for general audiences as well as for specialist readers eg he has written for publications as varied as The Listener, Little Treasures and The Write Stuff (NZ Writer's Guild), and is regularly called on for media commentary. He has also been a judge for the Qantas Television Awards, NZ Writer's Guild Awards, 48 Hours and TropfestNZ (2013-2015) , as well as acting as a nominator for the Kyoto Prize (Japan). He was a Trustee on the Digital Media Trust (NZ On Screen), 2010-2014 and is currently a Trusteee of the Coalition for Better Broadcasting.

He is also offers professional advice and participates in commissioned research for bodies such as the Maori Television Service, Television New Zealand, New Zealand On Air and the Broadcasting Standards Authority.

He has had a long involvement in the development of Media Studies in secondary schools, through the National Association of Media Educators (NAME), running conferences for teachers and workshops for students, and through writing resources. His 2002 book, co-authored with Helen Martin, It's All Done with Mirrors: About Television (Dunmore Press) and the 2009 report Media Studies in New Zealand Schools and Universities: A Research Report are examples of such work.

Recent research on Hollywood, fandom and cultural memory have resulted in publications such as 'Shirley Temple: Child Star' in The Routledge Companion to Global Popular Culture (2015) and 'The Child Star as Celebrity: Shirley Temple, Fandom and Memory' in O'Connor & Mercer eds.  Childhood and Celebrity (Routledge, forthcoming)