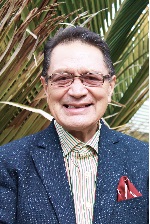 Learn from the best.

Pou Temara is Professor of Reo and Tikanga and is a recognised tohunga and authority in Māori language, ancient karakia, kapa haka and whaikōrero. Using traditional karakia, he has performed many opening ceremonies for new buildings, composed numerous award winning items in kapa haka, and his specialist esoteric skills are constantly called upon.

He is one of three directors of Te Panekiretanga o Te Reo, the Institute of Excellence in the Māori Language, where he teaches and researches whaikōrero, karanga, and tikanga. He was a member of the Māori Advisory Committee, and a former member of the Tūhoe Waikaremoana Māori Trust Board. He was also a past chairperson of Te Hui Ahurei a Tūhoe.

Professor Temara has written many publications and essays on issues currently affecting Māori.  His Master’s thesis, titled ‘Te Ahua o Te Kupu Whakaari, The Nature of Prophetic Sayings’, is still considered the benchmark for a thesis written in Māori.

He was appointed to the Waitangi Tribunal in 2008, is a past director of the Māori unit for Radio New Zealand and appears in many Waka Huia series as an expert commentator on historical affairs.  He was instrumental in the creation of the first Māori language series screened on Television New Zealand in 1982, appearing as the presenter for Kōrero Mai.

In 2012 his work was acknowledged at the national Te Waka Toi Awards, which celebrate excellence in Māori arts. He was recognised for his mastery of language with Te Tohu Aroha mō Ngoi Kumeroa Pēwhairangi.

He is Chairperson of the Repatriation Advisory Panel to Te Papa Museum, and in 2016 was made a Companion of the New Zealand Order of Merit for his services to Māori and Education.

Professor Temara continues his work in education as a lecturer, expert and mentor with the Faculty of Māori and Indigenous Studies at the University of Waikato.

Where most researchers pride themselves on producing books, Matua Pou's point of difference is that his research output is not only in the written word, but in people.  His knowledge is strengthening and educating people to be better equiped to take traditional Māori tikanga forward and apply it in a contemporary context.