An Honorary Doctorate is the most prestigious award that the University of Waikato can bestow. For their significant contribution to the University, the Waikato region and the wider New Zealand community, the University has awarded: 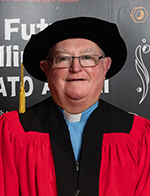 Ordained in 1962, Emeritus Bishop Denis Browne has served as a priest in Auckland and Gisborne,

and as Bishop of Auckland and Hamilton. He was a missionary priest in the Pacific Islands for several years from 1975, and in 1977 Pope Paul VI appointed him the third Bishop of the Cook Islands. As Bishop of Hamilton he was committed to enhancing the educational performance of the schools in his diocese, and was instrumental in appointing high-achieving school leaders and upgrading facilities to meet community expectations.

He has received several awards and accolades for his service, including receiving a Doctor of Divinity degree from the Vatican – an honorary degree denoting ordination as a bishop. In 2001 he was named a Companion of the New Zealand Order of Merit for his services to the community. 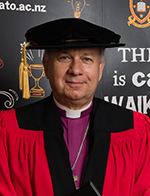 In 1993 Sir David became the youngest bishop of his generation when he was consecrated in Hamilton. Throughout his 20-year tenure as Bishop of Waikato, Sir David was committed to several social and political causes, and alongside Emeritus Bishop Denis Browne he supported the establishment of the Te Ara Hou Christian Social Services Village in Hamilton. 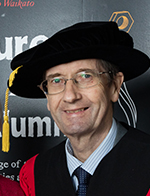 Emeritus Professor Robert (Roy) Crawford led the University of Waikato as Vice-Chancellor for 10 years, completing his term in December 2014. Irish-born, Emeritus Professor Crawford turned down a promising football career to become an academic, completing a BSc, PhD and a DSc at Queen’s University Belfast. His research focus was mechanical and process engineering; his speciality was polymers, and moulded plastics in particular.

He published nine books and more than 250 articles and was awarded more than a dozen international prizes and awards for his research. For more than a decade, while also holding down academic positions, Emeritus Professor Crawford was Director of Technical Services for ARM – a leading industry association in the USA. He was elected to their Hall of Fame in 2007, one of only four non-Americans to receive the honour.

During his 10-year tenure he led the evolution of a strategic partnership with Bay of Plenty tertiary institutions and guided the early planning for the new campus development in Tauranga. He oversaw almost $100 million of building projects on campus in Hamilton and played a key role in focusing the University on an excellence agenda. 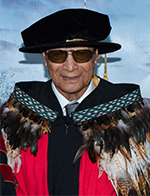 Morehu Ngatoko Rahipere MNZM, a Tauranga kaumātua has spent decades working for his people and has led many initiatives linked to the University of Waikato, including the establishment of the Te Kotahitanga research programme in Te Kura Toi Tangata Faculty of Education.

He is widely regarded as an acknowledged leader, an exponent of tribal lore and narratives, a man of mana and a formidable orator. He is a strong advocate of the long-standing relationship between Ngāti Ranginui and the Kīngitanga.

Dr Ngatoko Rahipere was instrumental in advancing the return of Mauao (Mount Maunganui) to the people and his expertise and knowledge in tikanga and kawa has ensured the mountain is protected and its cultural integrity is maintained.

He has given exemplary service to his community of Tauranga Moana; as college kaumātua to Tauranga Boys' College - progressing the building of a school marae; he supports Tauranga Girls' College; was central to establishing the partnership between Western Bay of Plenty Primary Health Organisation and Ngāti Ranginui; supports the Māori Health Rūnanga; the Christian Education Trust and the Bethlehem Campus and is actively involved with the kaumātua forum of Tauranga City Council. 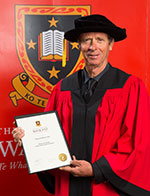 Richard 'Dick' Tonks is one of New Zealand's most successful rowing coaches. He was born in Whanganui and as a rower, won a silver medal at the 1972 Olympics in Munich in the coxless four.

After retiring as a competitive rower he turned to coaching, initially working nights so he could coach during the day. Dr Tonks has coached New Zealand rowing crews at the 1996, 2000, 2004, 2008 and 2012 Olympic Games and has been hugely influential on the careers of some of our best rowers, including Philippa Baker, Brenda Lawson, Rob Waddell, Hamish Bond, Eric Murray, Mahe Drysdale, and Caroline and Georgina Evers-Swindell.

Rowers under his guidance have won around 30 Olympic and World Championship medals since 2004, bringing immeasurable amounts of pride to the country and some of our most memorable sporting moments.

In the 2003 New Year Honours he was made a Member of the New Zealand Order of Merit for services to rowing. 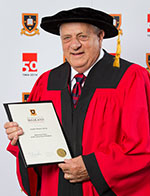 He has received numerous awards and appointments for his work, culminating in 1994 when he was Knighted for services to the dairy industry. Sir Dryden has been Chairman or director of some of New Zealand's largest companies, was a member of the APEC Eminent Persons Group which drafted the APEC Vision of "Free & Open Trade in the Asia Pacific, and has also served on the APEC Business Advisory Council. He is a Laureate of the New Zealand Business Hall of Fame, a Distinguished Fellow of the Institute of Directors, a Life Member of Waikato Federated Farmers and a Distinguished Fellow of Massey University Academy of Agriculture.

He has also been active with a range of charitable and community organisations. Sir Dryden has spent a lifetime making significant contributions, characterised by excellence, persistence and intelligence, to the Waikato, New Zealand and international commerce and he is a worthy recipient of the University of Waikato's highest honour of Honorary Doctorate. 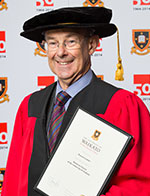 A specialist in litigation, Warren Scotter is a senior partner at Hamilton's Harkness Henry law firm. He is known in the law fraternity for his kindness and his dedication to the legal profession. He has also been an unfailing supporter of the University of Waikato's Te Piringa Faculty of Law, instigating and supporting the Faculty's annual Harkness Henry Lectures, which have been running for more than 20 years.

He was also instrumental in improving the quality of legal standards regulation and has provided support for many new lawyers entering practice in the region. In his day to day practice, Dr Scotter has appeared in hundreds of cases, frequently acting for the underdog. He is acknowledged as always being fair and balanced, and as a principled and respected lawyer. 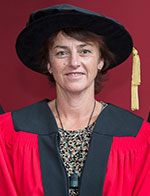 Dame Susan is a patron of the Muscular Dystrophy Association and has worked on the government-appointed taskforce on sport, fitness and recreation. She has been a supporter of mental health campaigns, been a chair of the Halberg Trust and continues as its Bay of Plenty representative.

She is a trustee on the Tauranga Energy Consumer Trust, has supported campaigns for international immunisation for children, and is currently a trustee and supporter of the National Centre of Cycling being built in Cambridge. 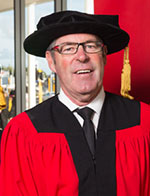 Bernie Crosby founded Prolife Foods with his wife Kaye in the 1980s and the couple have grown the business into one of New Zealand's largest privately owned and operated food businesses. The company employs more than 600 people and imports, manufactures and markets nuts, dried fruit, snacks, cereals and confectionary products, supplying products to supermarkets in both New Zealand and Australia.

Dr Crosby is known for developing and maintaining excellent relationships with stakeholders and staff and has been recognised for his leadership with many awards.

He has held directorships at several other companies and also contributes to the community through his support of the Hamilton Gardens, the MESH Sculpture Trust, the New Zealand Painting and Printmaking Award and the Coromandel Westpac Rescue Helicopter Trust.

He has also initiated a campaign to raise $1 million over five years to fund neurological research into Parkinson's disease. 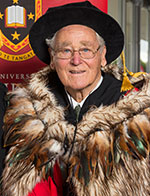 Gordon Stephenson is a farmer and conservationist from Waotu, near Putaruru. He is the founder of the QEII National Trust, established in 1977, and became the first person to covenant land under the trust.

Today more than 3500 covenants have been registered covering more than 100,000 hectares. He's been on the national body of Federated Farmers and Forest and Bird and had leading roles in organisations such as the Waikato Conservation Board, the Maungatautari Ecological Island Trust, the New Zealand Landcare Trust and the South Island High Country Review Committee.

He is the instigator of the National Farm Environment Awards and has been involved with countless other farming and environmental organisations for more than 50 years.

He is a Distinguished Life Member of Forest and Bird, an Honorary Member of Rotary and an honorary kaumatua at Pikitu Marae, Waotu.

See a list of our Honorary Doctors in the University Calendar 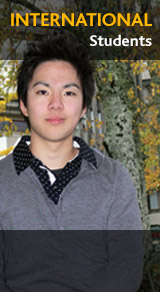