The Inaugural Professorial Lecture Series at the University of Waikato introduces our newest professors to the community. The 2013 series will showcase some of their latest research in Education, Science and Management - come along to find out what our people are doing, and how their work is having a real impact on the world around us.

All lectures are free and open to the public.

Time and venue: 6-7pm, Opus Bar open from 5pm at the Gallagher Academy of Performing Arts, University of Waikato. 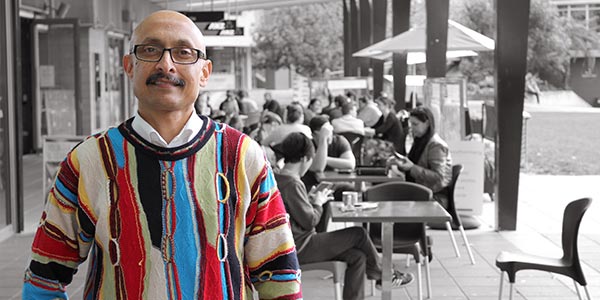 Who's Afraid of Diversity?

What does diversity mean in organisations and societies? Why do people talk about ‘managing’ diversity? Is the potential of diversity being achieved?

These are some of the questions Professor Debashish Munshi will discuss in his Inaugural Professorial Lecture this month. Debashish is a professor in the Department of Management Communication at Waikato Management School and has been researching diversity in organisations for more than 17 years.

His research, which involves in-depth interviews with people from diverse groups and an analysis of media, policy, and management documents, challenges the ‘dominant views’ that dictate decision-making in organisations.

Leadership for the Future: Has leadership theory lost its way?

Nelson Mandela, Martin Luther King and Gandhi - we know the names, but do we know what makes them, and people like them, good leaders? Such a question is the focus of Education Professor Chris Branson's upcoming Inaugural Professorial Lecture.

Chris lectures in educational leadership and is interested in the theoretical and practical skills required of good leaders. To this end, he describes three types of leaders; transactional, transformational and, a term he has coined, 'transrelational'.

Transactional leaders typify those common during the World Wars; the war hero, the army general, the expert. Churchill, who was directive and authoritative in his approach, is an example, says Chris. The transformational leaders are the Gandhis of the world, who care and lead people to create change and build capacity.

"The transrelational leader is someone who encourages understanding and empathy amongst others. These leaders create opportunities for people to work together harmoniously and encourage and celebrate people's differences." He says this style of leadership aims to create a society that is socially just and inclusive.

What's going on with Kim Dotcom?

Whether you believe Kim Dotcom to be a victim or criminal, his story has caught the public's imagination and highlighted inadequacies in New Zealand policing and in our extradition laws.

Professor Neil Boister, a specialist in transnational criminal law will discuss the Kim Dotcom case in his Inaugural Professorial Lecture this month.

"I chose my lecture topic a long time ago, thinking the Dotcom case would be all wrapped up by now. It's fascinating on many levels - how far the US and other western countries will go to maximise the protection of Intellectual Property, the complexity of police cooperation across borders, Dotcom's careful play to win over the public's hearts and minds, and speculation on how the courts will deal with him."

Neil has read the 90-page indictment. "He's an interesting person, Dotcom, but he is in a difficult situation here and will be in a more difficult position if the US authorities manage to get him to the United States. I think the case is evenly balanced in legal terms."

Neil joined Te Piringa - Faculty of Law this year, coming from the University of Canterbury, and the UK before that. He grew up in apartheid South Africa and studied at Natal University during the 1980s, one of the republic's most tumultuous periods.

Turning negatives into positives: The story of how a simple mistake led to new ways of modelling structures

Professor Ilanko, Department of Engineering, Faculty of Science and Engineering

Professor Ilanko's research and teaching looks at the behaviour of structures – how they move, how they undergo stress and how they vibrate. He says structures, like people, will undergo more stress when they are less flexible. "So sometimes it is useful to introduce some flexibility in structures to reduce stress levels."

He draws many other similarities between the forces on structures and on people to explain engineering concepts and he will do this also at his Inaugural Professorial Lecture this month.

When Professor Ilanko mistakenly put a negative symbol in front of a 'mass' in a complex engineering calculation in his PhD thesis, he inadvertently discovered a possible refinement to the 'Penalty method', a common numerical problem that has plagued scientists and engineers for more than 60 years.

The resulting calculations lead to more than 15 peer-reviewed journal articles and some healthy debate among his Engineering peers. "One reviewer went as far as to call it 'black magic', so in engineering circles ‘negative mass’ is probably still quite controversial."

View Professor Ilanko's full lecture on the University of Waikato's iTunes U channel.

Soil microbes that complete the nitrogen cycle: can we work in partnership?

Professor Louis Schipper will discuss how working with soil microbes could help overcome problems caused by human acceleration of the nitrogen cycle at his inaugural professorial lecture in May.

Professor Schipper, who started his career as a PhD student studying denitrifying microbes in riparian wetlands, will explain how his career has moved from simple research to creating systems utilising those microbes to return excess nitrogen to the atmosphere as a gas.

"Human acceleration of the global nitrogen cycle has increased food production for billions of people," he says.

"We have converted nitrogen gas in our atmosphere to biologically-available forms that substantially increase plant and animal growth. However, when nitrogen is in excess, its movement through the landscape leads to multiple unwanted environmental effects. Completing the nitrogen cycle to return excess nitrogen to the atmosphere requires us to learn how to work with soil microorganisms."

View Professor Schipper's full lecture on the University of Waikato's iTunes U channel.

For better or for worse, the story of life on Earth starts with thermodynamics. It is the interplay of energy, information, evolution and life which is the topic for University of Waikato biologist Professor Vic Arcus' Inaugural Professorial Lecture later this month.

During the lecture Professor Arcus will consider the quote from famous Oxford chemist Professor Peter Atkins who said of the second law of thermodynamics that "no other law of science has contributed more to the liberation of the human spirit" Professor Arcus has been with the Department of Biological Sciences since 2006.

View Professor Arcus' full lecture on the University of Waikato's iTunes U channel.

Anxieties of Knowing: Academic Pathologies, Critical Philosophy and the Culture of Self

Michael A. Peters, Professor of Education, has written dozens of books and hundreds of papers and chapters on education, philosophy and politics, but one paper has evaded him for the past decade. In his inaugural lecture as a professor of the University of Waikato, Professor Peters pursues this elusive paper theorising the concept of "academic pathologies" and examining what he calls the "anxiety of knowing". During the lecture, he draws upon the work of Danish philosopher Søren Kierkegaard, widely considered one of the foundational thinkers of existentialism, the American film-maker Woody Allen, and Jacques Derrida, among other thinkers, to talk about the culture of the "academic self".

View Professor Peters' full lecture on the University of Waikato's iTunes U channel.