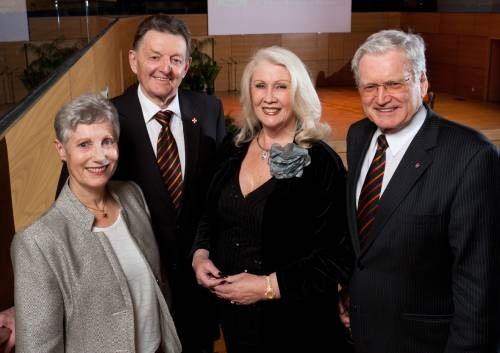 Hamilton’s Gallagher family has a long and proud history of supporting the University of Waikato.

Brothers Sir William and John have been at the helm of global animal health management and security company Gallagher. Originally established by their father in the 1930s, Sir William and John took over in the 1970s and grew the company to one of New Zealand’s most successful privately owned companies, now exporting to more than 160 countries.

Sir William is President and Executive Director, and John, now retired from day-to-day management, is a director. In 2021 Deputy CEO and Waikato Management School advisory board member Kahl Betham was appointed CEO of Gallagher Group Ltd.

The Gallagher family has had a long relationship with the University of Waikato, with earlier contributions in time and money to the development of the Don Llewellyn Sports Pavilion, the Sir Edmund Hillary Programme, The Great Race, and the Academy of Performing Arts.

Sir William and John, who both have Honorary Doctorates from the University of Waikato, have supported several University projects and initiatives over the years. Sir William served on the board of WaikatoLink, the University’s commercialisation arm, and has made significant donations to support several projects on campus.

Dr John Gallagher has also served on the University Council since 1990, been Pro-Chancellor and Chancellor, has been Chair of the University of Waikato Foundation and is now Patron.

A timeline of recent support

In 2011 the Academy was renamed the Gallagher Academy of Performing Arts, recognising the Gallagher Group and family’s long-standing support of the University, and they have recently recommitted to a further 10 years of support for the Academy. Inside the building, the Concert Chamber was renamed in honour of Dr John Gallagher.

In 2015, Sir William Gallagher established the Sir William Gallagher Master of Cyber Security Scholarship to support academically talented students studying towards a Master of Cyber Security, and with the opportunity to undertake a work placement at Gallagher. The scholarship has since supported several masters students, many of whom have gone on to successful careers in the cyber security industry.

In 2021 Sir William and his wife Lady Judi announced funding for the Dame Malvina Major Chair in Opera at the University, a position that aims to support voice students and further advance the University’s music programme. That same year they also announced the establishment of the Sir William and Lady Judi Gallagher Foundation Scholarship to support students undertaking study in computing and mathematical science, engineering, management and music (specifically opera), with special consideration to those who also show commitment to the wider community.

In 2021 the Gallagher Group announced three new scholarships at the University across engineering management, management studies, and data science. These areas of study align with the Gallagher Group’s own areas of interest and investment, and two of the scholarships come with the offer of additional work placement opportunities to enhance students’ real-world experience.