A small world of scientific difference 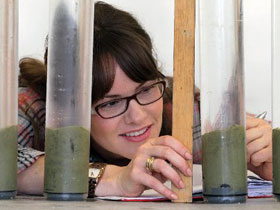 Small World: Waikato University PhD student Bryna Flaim is happy to be back in the world of science.
Photo: Waikato Times.

It’s a bit of a small world, believes Bryna Flaim, an American raised in Santa Barbara. She met her current PhD supervisor, Waikato University’s Terry Healy, at a wedding in New Zealand.

She thought she was done with science after completing a bachelor’s degree in aquatic biology at the University of California. “My mother passed away after I graduated, and I needed to do something different and worked in retail design in Santa Barbara for about four years,” says Flaim.

Then, in 2006, she came to New Zealand for her cousin’s wedding and got talking with Professor Healy. “He knew about my previous science background and had a project lined up, but there was no student in sight. Was I interested?”

The project involved working on a long-time environmental problem facing New Zealand – identifying sites for the disposal of material dredged from Auckland Harbour. Not having been involved in science for six years, she was a bit tentative, but finally accepted and arrived in February 2007 to begin her masters, which continued into her present PhD study.

“There were a whole bunch of sites on the east coast of Auckland, in the Hauraki Gulf, that were used in the 1980s and early 90s, which caused a bit of controversy. People had concerns, such as material washing up on nearby beaches, which wasn’t necessarily the case, but it’s understandable there was opposition to those operations close to shore,” says Flaim.

“As a result of this, some sites were closed. Then, especially after the Resource Management Act came into force in 1991, it became a problem getting consent to do any sort of disposal in the gulf. The reality is that we have to find an acceptable solution because the material blocking navigation channels is building up and something has to be done with it.”

One solution was to dispose of it at an old navy munitions site, east of Cuvier Island. “This is, in fact, what they are using at the moment, and part of the reason my project came about is because they really want to try and not use it,” says Flaim.

“The problem is that the site, on the continental shelf, is just too deep to allow any environmental monitoring. And there is the fact that there are unexploded munitions sitting on the sea floor.” The thinking was, Flaim has been told, covering the munitions with mud would make them safer, but it also makes monitoring impossible. Clearly, an alternative was needed.

A proposed site, 25km east of Great Barrier Island and 140 metres deep, had been identified as a possible location when Flaim arrived in New Zealand. Her task is to assess the suitability of this new site and to monitor the effects of test disposals.

In order to do this she has used numerical predictions to simulate conditions at the site and what would happen when material was unloaded. “These predict where this stuff actually ends up. We don’t want it coming within 12 nautical miles of the shoreline.”

Flaim has also undertaken fieldwork to establish a baseline of the site’s condition before disposal began. “Obviously we need to know what its natural state is like. I’ve been taking sediment cores, which allow me to identify the texture of the sediment and any fauna that is there, as well as looking at various characteristics of the water column.”

Flaim believes the bulk of the material will stay where it is put. “Our calculations indicate it’s unlikely to move, once it’s down there. For one thing, it’s so deep, and for another the waves in that region are generally small, so you wouldn’t expect much wave effects at the sea floor.”

Work has started on unloading between 5000 and 7000 cubic metres of dredged material and the early predictions are looking good.

“They started in mid-March, taking it out on a split-hulled barge, and have deposited about 4500 cubic metres so far. I’ve been monitoring the plume that crops up when you actually dump the material in the water. It makes the water look muddy for a little while. And, from what I’ve seen, it is heading off to the east, which is what was intended.”

After being involved with the project for so long, Flaim says it’s great to see it all come together. “I haven’t been on the barge myself, but have been out there twice while it’s being done. It’s working out really well.” There’s another monitoring trip coming up, if the weather permits, then the post-disposal survey work will begin in another few weeks. Sometimes, says Flaim, she feels a little out of her element.

“It is in general, a man’s world; the dredging, the civil works and even surveying and going out to sea. The other day I was trying to teach these fishermen out at Great Barrier how to do water sampling. I had them stationed at strategic points and had given them samplers that are sent down to whatever depth you want and then you send a weight down the line, which hits the sampler and triggers it to shut.

“When it’s brought up, it’s full of water from that depth. I was worried there might be malfunctions but they did great, there was one sample missing out of 72. They were awesome and were so easy going about it all. Hopefully they’ll come out on a future trip.”

A small world of scientific difference is licensed under a Creative Commons Attribution 4.0 International License.