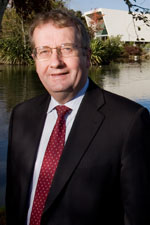 The University of Waikato has been commended in an academic audit for its Māori distinctiveness, its care of students, its commitment to the regions it serves and its focus on research-led teaching.

The New Zealand Universities Academic Audit Unit report, released on December 15, looks at all aspects of an institution that are related to academic activity. Waikato is the fifth of New Zealand’s eight universities to undergo a Cycle Four Audit between mid 2008 and mid 2012.

The university completed a self-review in May, and a panel visited the university’s campuses in Hamilton and Tauranga in August to talk to staff.

The subsequent report has praised the university for its involvement with more than 16 iwi throughout the central North Island and Bay of Plenty region and the way in which Māori heritage and identity is embedded in the institution. It also praised the university for the pastoral care of Māori students and the provision for students to be taught, supervised and assessed in Te Reo Māori.

Other highlights in the report included:

Vice-Chancellor Professor Roy Crawford says he is very pleased with the report. “It is a huge endorsement for the University of Waikato and shows we are indeed a world-class university.”

Professor Crawford says the university makes important economic, social and cultural contributions to the Waikato and Bay of Plenty regions, and the nation, and it is pleasing to have these publicly acknowledged.