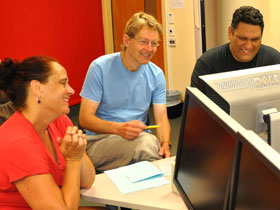 Past into the present: From left to right Elaine Bliss, Norman Franke and Jake Ngawaka editing Past Present, a documentary about poet and professor Peter Dane.

Holocaust survivor and former professor of English at Auckland University, Peter Dane, is the subject of a new documentary made by Waikato University academics. Past Present, the hour long film features Peter Dane talking about his background in Nazi Germany, his time interned as an enemy alien, his philosophy on life, his ideas about poetry and readings of some of his work.

Waikato’s senior lecturer in German, Norman Franke, teamed up with Elaine Bliss from Geography and Jake Ngawaka from Screen and Media Studies to make the film.

“It’s really an 89 year old man with vast and varied life experience talking about his life and thoughts,” says Norman Franke. “We spent about four days recording him, and then had the huge task of editing more than 20 hours down to 60 minutes.”

Peter Dane was born to a Jewish mother and German father. He fled Berlin for England just before the start of the Second World War but during the war was interned as an enemy alien in England and Australia.

It was while he was confined that he honed his English skills and embraced English literature. He graduated from London University in 1952 and taught in Africa for many years before joining Auckland University as professor of English literature in 1961. He now lives as a poet and an organic orchardist in the Bay of Islands.

“Peter is an amazing raconteur,” says Norman Franke. “So we deliberately made the film about Peter talking about what influenced him as a person and his poetry. His poems are very accessible on one level, but they are often layered and profound with complex subjects and themes.”

In the documentary, Dane claims that his poetry is old fashioned, but he doesn’t care. “I use rhyme. I write sonnets for goodness sake...that’s dated.”

He also tells of how when the Nazis came to power his mother went to pieces and he took over the shopping and cooking – learning his way around a kitchen from his grandparents’ cook – “a common woman who spoke the language of taxi drivers and prostitutes.”

The film makers say they hope Past Present will appeal to anyone with an interest in culture or history. They may also use it as a teaching tool with senior students doing directed research projects. They are hopeful that through their contacts offshore, the film will also be screened in Germany, Israel and possibly the US.

Past Present will premiere on September 16 at Waikato University and will be available on DVD early next year.