An honour for scientific study 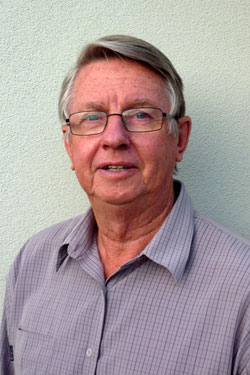 A scientist who’s spent nearly 50 years studying New Zealand’s lakes and rivers and coastlines is being awarded an honorary doctorate by the University of Waikato.

Max Gibbs, a fresh water and coastal scientist with NIWA, is also known internationally for his expertise in stable isotope techniques and analysis – which involves identifying and measuring stable isotopes in specific organic compounds as biomarker tracers.

“Max was a primary mover for the use of stable isotopic techniques in ecological and environmental study,” says University Vice Chancellor Professor Roy Crawford.

“He literally wrote the manual for the continuous flow isotope ratio mass spectrometer and he’s travelled the world to tell people about its application in a wide variety of contexts. He works with a combination of passion and ability and his achievements have been remarkable.”

Mr Gibbs’ career began as a technician at the DSIR’s Chemistry Division in Lower Hutt and he later spent time in Taupo with the DSIR’s Marine and Freshwater Division. He was a visiting fellow with Edinburgh University and joined NIWA in Hamilton in 1992.

During the 1970s and ‘80s, Mr Gibbs devised new techniques for iron measurement and water sampling that enabled scientists far greater insight into the state of our lakes. He remains a member of the Technical Advisory Group on the Rotorua Lakes for Environment Bay of Plenty and has managed long-term water quality monitoring on Lake Taupo since 1994 for Environment Waikato.

“He has the enviable ability to think outside the square,” says Professor Crawford. “That’s been the hallmark of many of his studies over the years. Through his position at NIWA, Max has supervised graduate students and supported university staff who work in similar areas of research. His observations, opinions and scientific contributions have helped shape the thinking of colleagues and students alike.”

Mr Gibbs says science and helping people are two of the many things he enjoys in life and it’s fortunate he’s able to do both in his work.

“I have been fortunate throughout my career to be mentored and encouraged by colleagues, many of whom are now world leaders in their fields. It seemed only natural to pass on that encouragement and mentoring to the students and colleagues I work with. To be nominated for this award by my peers in recognition of work I really enjoy doing was totally unexpected but much appreciated.”

An honour for scientific study is licensed under a Creative Commons Attribution 4.0 International License.