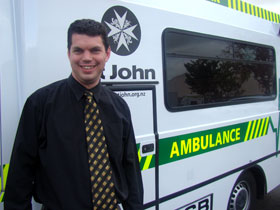 Hamilton-based Warren Rosser is the national internal communication coordinator for St John and a former Waikato University student. The Ted Zorn award is presented annually to Waikato management communication graduates who are excelling in their field and who have a strong focus on ethical practice.

“It’s an honour to receive this award,” says Rosser. “While I was studying, I never envisaged myself in an internal role like this. Most communication graduates probably imagine themselves in what’s perceived to be the more glamorous world of PR, events and advertising, but effective internal communications is where good communication really begins; it should be part of your strategic planning. If you’re doing things right in-house then your staff become fantastic ambassadors for your business.”

Rosser left university with a Bachelor of Communications, a Postgraduate Diploma in Public Relations and finally, in 2006, a Master of Management Studies.

He also tutored during his time at Waikato and worked on a major biotechnology research project that was investigating public discussion on genetic modification. From that he developed a framework to show the ways that community groups can participate in public discussions.

“Warren isn’t afraid to take on new challenges and explore new ideas,” says Professor Ted Zorn who first instigated the award in 2004. “He’s one of those people who won’t ever stop learning and giving. One of the things we really appreciate is that he continues to help our current students, through an internship and guest lectures.”

During the last year at St John, Rosser has seen the introduction of an intranet site and assisted with the implementation of a number of new channels to deliver a variety of messages to staff.

“St John comprises a mixture of paid and volunteer people. Their needs are often different, but the very nature of our work means communication delivery has to be timely, accurate and effective,” he says. “I’m learning a lot as we continually strive to deliver a better service to people throughout New Zealand.”

The Ted Zorn award will be presented at a special function on May 5.

An inside job is licensed under a Creative Commons Attribution 4.0 International License.