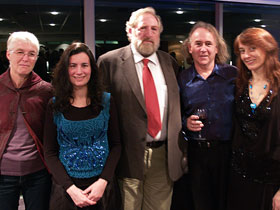 New Zealand Chamber Soloists have released a new CD. It’s called Elegy and was launched at Waikato University’s Academy of Performing Arts in late June. Their first CD Ahi was a finalist in last year’s Vodafone Music Awards and featured the work of local composers. Elegy focuses on the Russians.

“We chose the Russians because we’d performed these works many times to enthusiastic responses,” says cellist James Tennant. The works include Rachmaninov’s single-movement Trio Elegiaque from which the CD gets its name, Shostakovitch’s dramatic E minor Trio that captures the unsettling years of the Second World War and the relatively unknown 1952 Piano Trio by Armenian composer Arno Babajanian.

“They are all three powerful and beautiful works which move us and our audiences with their luscious melodies, robust rhythms and the connection with the elegiac side of our emotions.” New Zealand Chamber Soloists are all musicians who have a link with the University of Waikato’s Music Department through teaching and research.

The key three are Tennant, pianist Katherine Austin and violinist Lara Hall. They call in other musicians if a piece requires additional instruments or different combinations. The CD was recorded over two years at Waikato University’s Academy of Performing Arts concert chamber and produced by Atoll Records with award winning director Wayne Laird.

Last year, the New Zealand Chamber Soloists toured Europe, the US and Colombia, South America, with sponsorship from Ian and Agi Graham who’ve supported the group for a number of years. Dr Ian Graham is a former Dean of Computing and Mathematical Sciences at Waikato University and founder and chairman of international computer network security company Endace.

“We were bowled over by the response on our overseas tour,” says Katherine Austin. “We received standing ovations in every centre we played in. A number of people came to us after the concert still weeping, many saying they had never heard this music sound so vital and so deeply moving.”

This year, between teaching and recording, the chamber musicians have been touring New Zealand, under the auspices of Chamber Music New Zealand and their touring will continue till the end of next year. Elegy is available from Marbecs in Auckland and Parsons in Wellington.

Backing the music is licensed under a Creative Commons Attribution 4.0 International License.