Bags packed and he is off to Cambridge University 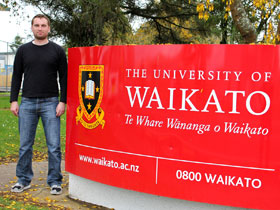 Waikato to Cambridge: Thomas Stubbs leaves for the United Kingdom at the end of September.

It’s been a long time coming, but University of Waikato student Thomas Stubbs has finally got his tickets booked to the UK.

Stubbs is one of a handful of New Zealanders to receive a Cambridge Commonwealth Trust Prince of Wales Scholarship, which will see him studying towards his PhD at Cambridge University.

Twelve months ago, Stubbs, 26, posted his application to Universities New Zealand (formerly the New Zealand Vice-Chancellors’ Committee). After no news for several months, he forgot about it and looked at other options. That was until he received a phone call from the committee, and on September 28, his journey will begin.

Stubbs, a Bachelor of Social Science (Hons) graduate, has recently completed his Masters at the University of Waikato, which was supervised by Dr David Neilson from the Labour Studies Programme. Thomas explored the field of political economy and the world of precarious employment – where circumstances can be very unstable for workers. He plans delve deeper into this for his PhD research at Cambridge.

Stubbs has received several scholarships while at Waikato University, and says really values the opportunities they have given him.

The Prince of Wales scholarship, which is open to all New Zealanders, sees students beginning and completing their PhD study at Cambridge University. It will cover all of his fees for the three years, which equates to about $80,000.

It’s a great opportunity, he says. “What I’m studying at the moment isn’t really something I can get backing from an organisation for, so I really needed the support to do this – it’s great.”

In Cambridge, Stubbs plans to live with other graduate students on campus. “The university has a collegiate system, where people usually live in the college campus for the duration of their study. It’s not like New Zealand where students stay in the Halls of Residence for their first year only.”

Bags packed and he is off to Cambridge University is licensed under a Creative Commons Attribution 4.0 International License.