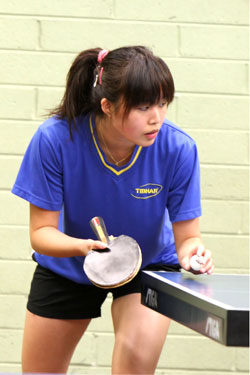 National table tennis player Sarah Her-Lee has just struck lucky. The Waikato law and politics graduate has secured a sponsor, Auckland based Equity Law, to help her get to the World Table Tennis Championships in Russia next month. They have also offered her a job once her table tennis commitments are over.

“I’m so appreciative of their support,” says Her-Lee. “They want to encourage and support talented sports people in New Zealand especially those who wish to compete overseas and find it hard to arrange for funds. Their support is a huge relief for me."

The 24-year-old recently completed her Bachelor of Laws and Bachelor of Social Science, fitting it in around a demanding table tennis schedule. She never intended to become a national player but her natural talent was picked up by some discerning coaches - Murray Finch, Hamish Rennie and Alan Ward - after some early input from her dad.

“We came to New Zealand from Taiwan when I was ten. My father played table tennis and I’d have to go down to the stadium and hang around while he played. I eventually picked up a bat to relieve the boredom. I found it fun, and when coaches said I had potential I started to have coaching and playing in tournaments. I must have been about 14.”

Her-Lee first represented New Zealand at junior level in 2002 and since then has been competing regularly for New Zealand at home and overseas, though this will be the first time she’ll have been to Russia. She also hopes to make the NZ team to compete at the Commonwealth Games in New Delhi in October.

While she was at university and a Sir Edmund Hillary Scholar, not only did she have her course fees paid, she also had free gym membership, squad training and one on one coaching. “The scholarship also provided leadership training, which I felt was a very valuable part of the programme. I have attended workshops on public speaking and media training and I’ve also attended seminars given by very inspirational speakers.

“In addition, being part of the scholarship programme meant that the lecturers were very supportive if I had to be away for training camps or national/international competitions. I was also able to sit tests earlier or they were flexible with assessment dates.”

Batting for New Zealand is licensed under a Creative Commons Attribution 4.0 International License.