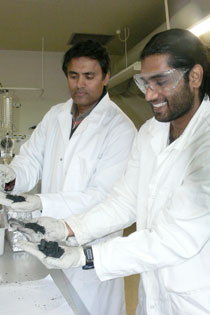 Each year, farmers use around 60 tonnes of veterinary antibiotics to prevent and treat diseases and to promote growth. But 60-80% of each dose passes straight through the animal and ends up in the environment.

Soil- and water-dwelling microorganisms exposed to these antibiotics can develop resistance, which in turn can be transferred back to both livestock and humans.

The problem is made worse by muckspreading, which further loads the soil with contaminants.

But now researchers at Landcare Research and the University of Waikato have come up with a novel way to soak up these unwanted contaminants – and increase soil fertility at the same time.

The solution may lie in biochar – which is what you get when you burn any form of biomass in the absence of air. It’s how charcoal is made from wood, but biochars can be made from many materials – green waste, sawdust and even corn cobs.

“Biochar has many advantages,” says PhD student Prakash Srinivasan, who is working with Landcare Research scientist Dr Ajit K Sarmah and Waikato’s Professor Merilyn Manley-Harris on the biochar project, funded by the Foundation for Research, Science and Technology.

“It’s easy to make from organic waste, and being 80% carbon it’s a form of carbon sequestration, so it contributes to reducing greenhouse gas emissions and can potentially help increase soil fertility. What’s more, our research shows it’s a good way to absorb organic contaminants, such as antibiotic residues.”

Mr Srinivasan has tested the absorption properties of three different biochars, and his initial findings show that biochar made from pine sawdust, sourced from Rotorua’s Lakeland Steel Products Ltd, is the most effective.

Mr Srinivasan says biochar applied at the rate of 10 tonnes per hectare would be an effective way to slow down the release of these contaminants to a manageable level.