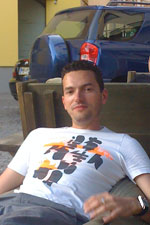 University of Waikato teacher education graduate Rene Novak stands out in his profession – he is Slovenian, was a professor in pedagogy and biology in his home country and is a male early childhood teacher.

Despite being one of only a handful of males in the early childhood profession, Rene is not perturbed and says he can add a missing dimension to children’s lives. “The children often say things such as, ‘why do you have hair on your face?’ or ‘you are like my dad, aren’t you?’”

Although he initially felt awkward about such questions he now welcomes them. “I know some of the children are missing the adult male presence in their life. This is where I can give answers for which many children crave.”

He says other males should not be discouraged from entering the profession due to stigmas. “There is a great shortage of men in the early childhood sector and it is a very rewarding job. I love spending time with the children and getting to know their parents and whānau.”

Although Rene studied and worked in early childhood education in Slovenia, he says his teaching qualifications were not recognised in New Zealand.

“I chose Waikato for its supremacy amongst the educational providers. It was also conveniently available through online study.”

Now that he is on track to following his dreams there is no looking back. “Working with young children is where you can have the most influence and develop their potential,” he says.