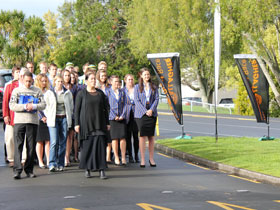 The University of Waikato laid down the challenge to the men’s eight from Cambridge, followed by an official welcome from the University’s Vice-Chancellor Professor Roy Crawford.

In response, Cambridge University performed their own song they had written about the Great Race challenge, in front of crowd of about 100 people from the university and the community.

The welcome also included the women’s crew from Sydney University, who sung a pop version of the Australian national anthem.

The true test for these crews now sits on the water. With scores set at two apiece for the men, who ever lifts the Harry Mahon Trophy will take the lead in this battle.

The university sponsors the Great Race, which includes corporate and school races, the Bryan Gould Cup between the University of Waikato women's eight and a Sydney University women's team, and the Gallagher Great Race men's race. The major races begin at Hamilton's Ann St, ending 4.2km later, upstream outside the Ferrybank function centre.