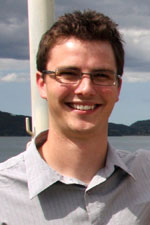 A chemistry experiment with an unexpected outcome has yielded a stunning silver fern image which goes on display at a Christchurch exhibition next week.

The image is of a fern-shaped crystalline structure just 30 millionths of a metre long – unlike the real silver fern, which can grow up to four metres long.

Waikato University Masters student Sam Pachal and his supervisor Dr Graham Saunders created the image by accident when they were repeating an experiment in the lab to find out if it was possible to make silver deposits adhere to aluminium foil.

“The silver all fell off straight away – which was not what we wanted,” says Pachal. “But when we looked at the silver powder residue under a scanning electron microscope (SEM), we saw loads of these fern-like structures.”

The naturally occurring crystalline structures are known as crystal dendrites after the Greek word for tree. They are very common, and also appear in snowflakes and frost.

It was Dr Saunders who spotted the fern shape, says Pachal. “It was while the All Whites were playing at the World Cup, and Graham said look, a silver fern, so we took some photos of the image and submitted them to the exhibition.” 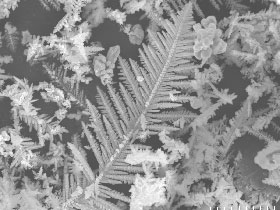 Chemistry art: The image is of a fern-shaped crystalline structure just 30 millionths of a metre long.

The image, taken with the assistance of SEM technical officer Helen Turner, has been selected as a finalist in The Art of Nanotechnology exhibition which opens in Christchurch on August 11.

“We were actually experimenting with a process to put silver directly onto titanium to create a rough surface that repels water, as part of the superhydrophobic project we’re working on,” says Pachal. “So we weren’t looking for an image. But it’s quite neat to have your work noticed.”