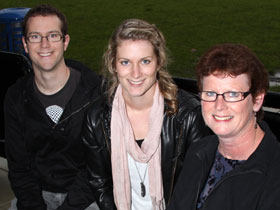 All in the family: The Easter family from left Ashley, Caitlin and mum Ann.

Ann Easter has gifted and talented children, but that’s not the reason she’s studying high achieving students for her PhD. Ann, mother to Ashley and Caitlin has been working at Waikato University in the Faculty of Education for a decade, but in March she began her PhD to study the experiences of students who enter university at a young age.

She’s been awarded a University of Waikato Doctoral Scholarship which will cover her fees and provide a modest living allowance for the three years her degree will take.

“Overseas evidence shows that advancing gifted children through the education system is beneficial,” says Ann, “but there’s a lot of negative reaction to it in New Zealand, often around the social and emotional development needs of children not being met.But very little research has been carried out in this country, so I’ll be talking to students who have started university early to find out what it was like for them.”

Her son Ashley was 17 when he started university, not much younger than most first year students. But now, at 23 he’s about to leave Waikato to study for his PhD at Cambridge University in the UK. He’s one of three New Zealanders to receive a Woolf Fisher Scholarship that covers study fees, living costs and flights for three years – worth about $250,000, he says.

Ashley will be part of a team of scientists at the Laboratory of Molecular Biology working to determine the structure of large protein complexes that modify mRNA molecules before proteins are synthesised.

“We want to know why and how they work. Its blue skies research that in time could have wide ranging applications,” says Ashley. He finished his MSc in Biochemistry in February and has been working in the university labs under Associate Professor Vic Arcus, who also studied biological sciences at Cambridge.

Caitlin Easter represents Waikato in netball and at swimming and is in the third year of a Bachelor of Social Science. Caitlin has become adept at juggling study alongside her sporting commitments.

She’s at university on a Sir Edmund Hillary Scholarship which covers her course fees and provides leadership training and extra sports coaching during her time at university.

Next year she’ll do honours and after that hopes to be one of eight students accepted onto Waikato’s postgraduate clinical psychology programme, which will require another four years of study. “Psychology is a fascinating subject,” she says.

“At first I wanted to do sports psychology, but now I think that criminal psychology would be an interesting path to take. The more you learn about the subject the more interesting it gets.”

The centre-wing attack will be turning out for the Waikato Under 21 netball team at nationals during the university holidays, then once the netball season’s over it’ll be back in the pool for her all-consuming summer sport.

There’s one member of the Easter family who isn’t currently studying. Dad Michael is Network Manager at St Paul’s Collegiate but he also attended Waikato University, one of the early graduates of a Master of Science in biochemistry.

Clever bunch of Easters is licensed under a Creative Commons Attribution 4.0 International License.