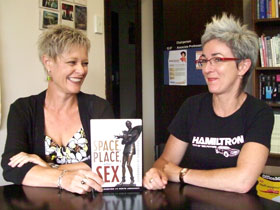 Two Waikato University feminist geographers have had their work acknowledged by the New Zealand Geographical Society which is meeting in Palmerston North this week.

Professor Robyn Longhurst has been awarded the society’s most prestigious award, the Distinguished Geography Gold Medal for outstanding and sustained contribution and service to geography.

Her colleague, Associate Professor Lynda Johnston has been awarded a Distinguished Service Award for her significant contribution to New Zealand geography and its community over the last five years.

They both obtained their doctorates at Waikato and have gone on to become well known internationally. The Geographical Society’s Executive Manager June Logie says it’s great to see them rewarded for many years of strategic and important work. “They are significant feminist New Zealand geographers who’ve made enormous contributions in their area of research. Their work has received much acknowledgement here and overseas and it’s great to see them rewarded.”

Longhurst and Johnston research and write about people and place and the importance and influence of gender in people’s lives. Much of their work has been a collaboration - their latest book is called Place, Space and Sex: geographies of sexualities published by Rowman and Littlefield.

Professor Longhurst says she was drawn to human geography by a previous Society medal winner Ann McGee who taught at Waikato. “When I was a student, Ann really opened my eyes to radical geographies, she even taught anarchist geography, and it became important to me to do research that brought about positive social change.”

“We’ve also had good support for our work from the university,” says Associate Professor Johnston. “Waikato’s led the way with feminist geography and given us time and space to do work that’s far from mainstream and sometimes risky. So it’s good to be recognised.”