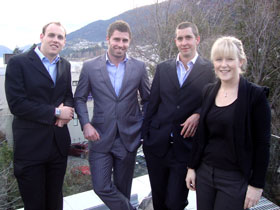 A team of students from the University of Waikato Management School is celebrating a double victory.

At the finals of the national student case competition in Queenstown last week, Waikato beat five other New Zealand university teams to win the national league championship, and was also judged international champion in a ten-team competition including teams from Holland, Australia, China and Singapore.

The New Zealand Business Case League is held annually with six rounds of competition through the year. In each round, student teams from Waikato, Massey, Auckland, AUT, Canterbury and Otago are given a case and then compete to come up with the best business strategies which they must present to a judging panel of business leaders.

For the three-day final in Queenstown this year, the six New Zealand teams were also joined by four international university teams – Maastricht of Holland, QUT of Queensland, Shantou of China and Nanyang of Singapore.

The winning Waikato team of Daniel Stevenson, Donna Frederikson, Michael Hall and Jeremy Harwood impressed the judges with the depth, scope and business savvy of their analysis of the ski industry in the international competition final. “They were incredibly impressive,” said NZSki CEO James Coddington. “I only wish I could hire all of them.”

It’s the second year Waikato team leader Daniel Stevenson has been involved in the Business Case League, and he says adding the international dimension has taken the competition to a whole new level.

“Maastricht and Nanyang have an excellent reputation in case competitions, he says. “The Waikato team hasn’t had the opportunity to take part in case comps overseas, so it’s great to see that we can foot it with the best of teams internationally.”

Stevenson graduates with a Bachelor of Management Studies (Honours) later this year, and has secured a place on Deutsche Bank’s prestigious graduate entry programme in Sydney. “Taking part in the case competitions has been the highlight of my time at Waikato, and the real-world business experience has given me the edge in finding a job,” he says.

“Each of the New Zealand universities competing has fantastic students who deserve the opportunity to test themselves against the world’s best. We at Waikato are very proud to have won the inaugural international event on the back of intense preparation. But the bigger benefit is in connecting all the New Zealand students involved to a network of future global business leaders.”