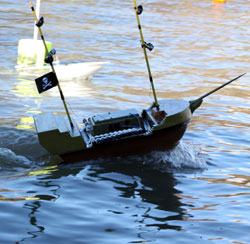 Calm waters: One of the 31 boats created by first-year engineering students to compete in the annual boat race.

The boats were made by first-year students as part of their Foundations of Engineering course, teaching them about design and also providing a fun day out.

“There were 21 teams racing a total of 31 boats, with teams each choosing a country and dressing up appropriately,” says Dr Torrens. “Team Madagascar had a surprising win in the finals against Team Jamaica, who were the team favoured to win, with the fastest race times during the heats.”

The boats, built within specific budget, time, material and design constraints, were tested on their manoeuvrability and speed on the campus lake course. While no boats sunk this year, some boats were less than keen to get out into the open waters, starting the race in reverse. “This was due to boats being wired the wrong way round, and luckily a quick reversal of wires saw the boats out on the lake,” says Dr Torrens.

Engineering staff also made boats to race the students after the official races were completed. Unfortunately, the staff were not able to add to their tally of only one win against the students in the last seven years. “This is obviously due to the students being well versed in navigating the course by the time the student v. staff race occurs, while the staff are fresh in the water,” commiserates Dr Torrens.

“The students approached the day with a mix of fun and competition, and when it came to the racing there was no mucking around. While no underhand tactics were being employed, some teams did seem to be working the ‘give-way to your right’ rule to their advantage.”