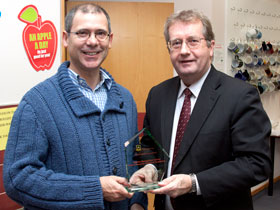 An international leader in the field of non-market valuation is the winner of this year’s Waikato University Management School Dean’s Award for Research Excellence.

Professor Riccardo Scarpa is a Professor of Environmental Economics whose work spans willingness-to-pay models for utilities such as water and models for determining the value of different genetic traits in livestock in developing countries.

Professor Scarpa’s research focuses on stated preference non-market valuation, and he is at the forefront of developing efficient experimental design, estimating willingness to pay and accounting for respondents ignoring specific attributes of choice.

“When survey respondents have to consider many different aspects, often it’s just too hard for them to work out all the tradeoffs between value and utility,” Professor Scarpa explains. “My research has found a way to identify respondents like this through the pattern of their choices, which gives much more plausible survey results.”

Since 2006, he has published an average of eight refereed journal articles per year, and he is frequently invited to present international keynote addresses and lectures. Professor Scarpa also holds two honorary appointments at universities in Australia, and two visiting professorships at universities in his native Italy.

“Riccardo is an outstanding scholar whose research is of great interest to scholars around the globe,” said University of Waikato Vice-Chancellor Professor Roy Crawford, who presented the award.

“His research has also had a significant impact on practice with many international organisations, including the Food and Agriculture Organisation and the International Fund for Agricultural Development, using his models.”

The Dean’s Award for Research Excellence is made annually to recognise and celebrate WMS scholars whose research makes world-leading contributions to theory. It involves a rigorous selection process, including external assessment of the candidates.

Professor Scarpa said he was delighted to receive the award, and thanked his colleagues and PhD students for their support in his research.

Professor Scarpa receives a plaque and an honorarium of $5,000 in research funds.