Waikato University’s Faculty of Law is 20 years old, but it nearly didn’t happen at all. In the December of 1990, with planning for the new school at an advanced stage, Education Minister Lockwood Smith told Waikato’s Vice-Chancellor Professor Wilf Malcolm that the new National Government was withdrawing the promised $10 million establishment funding.

A million dollars had already been spent. Margaret Wilson had already been appointed Foundation Dean; she’d recruited a dozen staff and had a thousand applications for 350 student places. Wilf Malcolm, believing the university needed to increase its professional programmes, refused to pull the pin and rallied support from across the university which enabled the school to open its doors the following March.

Professor Wilson told the gathering that those early days tested her physical, emotional and intellectual stamina and her commitment to her principles like she’d never been tested before. “But it made my future roles look easy,” said Prof Wilson, who went on to become a key player in the Helen Clark-led Labour Government through a number of Cabinet posts and then as Speaker.

Waikato chose not to follow the traditional models of the country’s other four law schools. Waikato’s degrees were planned around an integrated and distinctive curriculum that focussed on professionalism, law in context, biculturalism and the Treaty of Waitangi. “We wanted a law school accessible and relevant to the people of the region, where, based on academic achievement, anybody could enrol,” said Professor Wilson. “Maori, rural people and women - people who would serve all sectors of the community.”

Judge Stephanie Milroy completed her Masters in Law at Waikato, taught in the school and developed a number of courses, one of them being health law. Importantly, she worked on the school’s bicultural legal education and curriculum. “People described us as visionary, brave...and foolhardy. We had our guiding principles but we also had to show everyone that we were a proper law school, not just one for Maori and feminists. But we also wanted it to be the Maori law school of choice and a number of initiatives we implemented enabled us to do that.”

Now known as Te Piringa Faculty of Law, the current dean is Professor Brad Morse who came from the largest law school in Canada to head New Zealand’s smallest. His goal is to make the faculty the best in the country with a global reputation for excellence in key fields. “One of the major immediate challenges,” said Professor Morse, “is to finally undo the continuing effects of the loss of the original $10 million government commitment from 20 years ago, which was to help fund construction of a proper law school building. The Faculty of Law has obviously long since outgrown the ‘temporary premises’ put up in a rush in 1990 to meet the arriving students.” 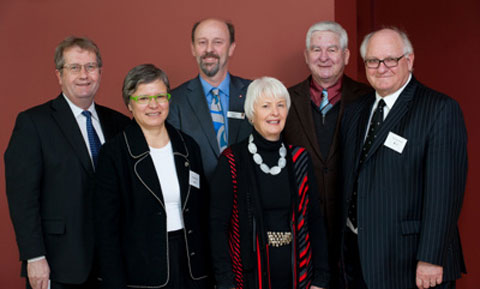