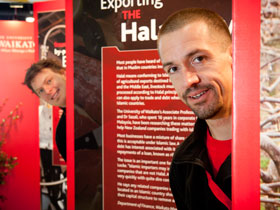 The National Agricultural Fieldays got underway in typical crisp cold Waikato weather, with thousands converging onto Mystery Creek on day one of the country’s biggest agricultural event.

An estimated 120,000 people are expected to attend the 42nd National Agricultural Fieldays, which runs from the 16 June – 19 June. Visitor numbers were 26,118 on opening day - up 9% on attendance numbers for the same day last year.

A strategic partner of Fieldays for the past four years, the University of Waikato is one of 1000 exhibitors showing at the annual trade show. The University has a long-standing association with Fieldays, as it was the first-ever Vice-Chancellor Sir Don Llewellyn who helped establish the event in the 1960s.

To reflect this year’s theme of ‘Innovation for future profit’, the University is again hosting its Seminar Series, with keynote speakers including Waikato University experts Dr Stephen Lim, Professors’ Barry Barton and Natalie Jackson, as well as economist Gareth Morgan and international soil ecologist Dr Christine Jones, presenting over the next two days.

The University also has a display stand promoting its research and expertise in the Premiere Feature centre. It was an opportunity for Waikato University Vice-Chancellor Professor Roy Crawford to present to Prime Minster John Key some of the research the University is involved with, and for staff and students to discuss their research. 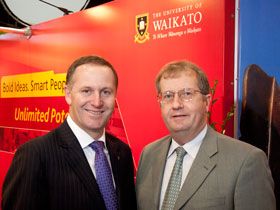 The National Agricultural Fieldays ends on Saturday 19 June. For more information about the University of Waikato at Fieldays click here.