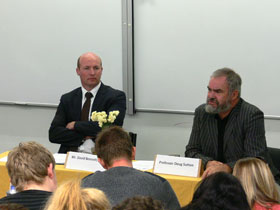 It was a battle of words and wits for Deputy Vice-Chancellor Doug Sutton, when he squared off with Hamilton MP David Bennett in a friendly debate for Waikato Management students earlier this week.

The debate was organised by lecturer Dr Margalit Toledano for students in her Management Communication’s class. The topic for the debate was New Zealand’s tertiary education funding system and the Government’s recent capping admissions for universities.

Students were to use the debate for their class assignment and prepare both a media release and twitter feed about the discussion. They would also need to produce a two-minute podcast of the debate.

It was an opportunity for students to explore both social and print media says Dr Toledano. Mr Bennett and Professor Sutton provided ‘insightful discussion’ and ‘newsworthy’ content that the students could use for their assignments, she said.

Friendly debate gives students something to twitter about is licensed under a Creative Commons Attribution 4.0 International License.