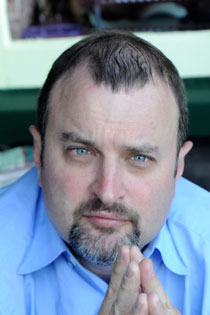 One of Google’s top software engineers is to be officially recognised by the University of Waikato for his innovative research contributions to both computer science and the ICT sector, and for the way he has increased New Zealand’s profile with Google.

Dr Craig Nevill-Manning is the founder and director of Google’s first remote engineering centre in New York. He led the development of Froogle (now Google Product Search) and played a key role in developing Google Maps.

He is one of three alumni to be given Distinguished Alumni Awards on August 27 at a university function hosted by the Chancellor, former Prime Minister Jim Bolger, and the Vice-Chancellor, Professor Roy Crawford.

“Dr Nevill-Manning is a tireless leader and mentor, and many students and staff at Waikato have benefited from his generosity and advice,” said Professor Crawford. “His accomplishments and personal qualities set him among the best of graduates from the University of Waikato.”

Dr Nevill-Manning completed his doctorate in computer science at Waikato in 1996, supervised by Professor Ian Witten, before moving to the US for post-doctoral work at Stanford. A brilliant researcher, his work covers the fields of data compression, information retrieval and computational biology. While at Waikato, he also worked on the software behind Greenstone, an award-winning open source digital library project which has been endorsed by UNESCO.

After a stint at Rutgers University in New York, Dr Nevill-Manning joined Google in 2001 as a senior research scientist. Two years later, he set up the company’s software engineering centre in New York, which now employs more than 1,000 staff.

He has provided support for digital libraries in Africa using Waikato’s Greenstone technology, and has also helped recreate a little bit of Google’s famous workplace culture at Waikato, upgrading the facilities in Department of Computer Science’s social space to encourage creativity and lateral thinking.

Director of Development Christine Brabender says the awards were introduced to celebrate the achievements of the university’s most successful alumni and to demonstrate the heights Waikato graduates can reach. “Past recipients have included Solomon Islands Prime Minister Dr Derek Sikua and Lt Gen Jerry Mateparae, Head of the New Zealand Defence Force, as well as several other impressive awardees,” Ms Brabender says.

The other two recipients this year are leading businessman Lt Col Tenby Powell and Kiwibank founder Sam Knowles. All three recipients will be presented with a limited edition cast-glass figure created exclusively for the award.