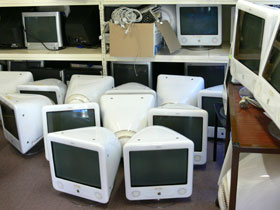 Computer upgrade: Some of the computers the Faculty of Education donate through the Computer Donations Programme.

Hamilton East School is the latest outfit to benefit from computer upgrades at the University of Waikato.

“The donations programme is an opportunity for the university to engage directly with schools,” says Faculty of Education Associate Dean of Organisation, John Graham. “The cost of IT equipment is at times quite high, but with this programme we can support schools that we know will benefit greatly.”

Hamilton East School received 12 Apple Mac computers and six iBook laptops from the University of Waikato. The scheme began in the Faculty of Education and is now a university-wide policy.

Hamilton East School acting principal Pippa Wright says receiving the computers has been a great help. The school had to replace some computer equipment and other resources after a fire destroyed a classroom last year.

“The computers we received have gone into classrooms and will help with learning as students can access information on the internet,” says Ms Wright. “It’s also a fantastic way for students to build on their literacy and numeracy skills.”

Waikato University upgrades its 4500 PCs on a rolling basis about every four years. Schools and early childhood centres can approach the university with requests for computing equipment by visiting http://www.waikato.ac.nz/about/community/donations.shtml