Heading home from the Ice

Waikato University student Tanya O’Neill is spending eight weeks in Antarctica as part of her PhD on soil sciences. In a series of occasional columns, she shares some of the highlights and lowlights of life on the ice. 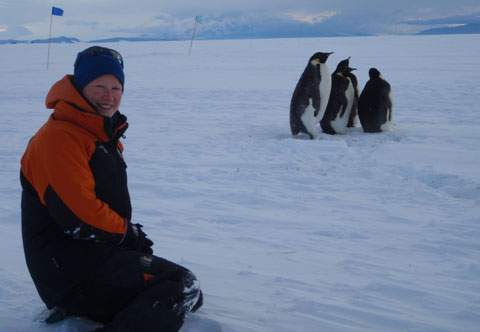 NEW FRIENDS: Waikato University student Tanya O'Neill with some Emperor penguins at Scott Base. They are rare visitors to the Base, having travelled from Cape Crozier on the other side of Ross Island.
Photo:  Tanya O'Neill.

The year has certainly started off at blinding pace; as I write this final column I’ve got just two days left on the Ice.

I am very happy with all our team accomplished this campaign. The remainder of our fieldwork in the Dry Valleys went wonderfully; the weather gods were definitely shining on us as we had day-after-day of pleasantly mild weather, while Scott Base was blanketed in snow many days. Our team of four worked around the old Vanda Station site, climate station and borehole sites, and old campsites in the Wright Valley; as well as assessing surface pavement recovery at the Canada Glacier Tourism Zone in the lower Taylor Valley, and the ice-free storage area for the late 1990s Cape Roberts Drilling Project.

We made some interesting observations in terms of human activity – while the accepted rule has been to move along single, well-established tracks, we found that those tracks remain visible in the landscape for a long time. By comparison, at many of the sites we visited, random, dispersed footprints around camps on a variety of surfaces readily recovered and were undetectable within one-to-three years.

It is difficult to pick highlights of my time on the Ice – every day is different – but I think nothing beats the grandeur of the Dry Valleys. I loved waking up in the little green Kiwi huts near Lake Vanda, surrounded by towering peaks. Our New Year trip along the shores of the permanently frozen Lake Vanda (10km long in a straight line) to the Dias, with its unusually weathered rocks, was another highlight. (It’s a landscape Sir Peter Jackson would die for.) Back on Base, a very memorable highlight was being woken by the Antarctica New Zealand Sir Peter Blake Youth Ambassador – Natalie Miedema from the University of Waikato – who had just had the “best day ever” – and her captivating delight of her visit to Scott’s Discovery Hut, and the spectacular views of Mt Erebus from the crater of Crater Hill.

The Base is now in a winding down mode. The Swedish icebreaker, the Oden, has broken ice right up to the McMurdo ice wharf, and is busy travelling backwards and forwards to the open water, breaking up a channel for the fuel and resupply ships which are due in the coming weeks. Melt pools have brought in plenty of wildlife - Weddell seals line the pressure ridges running alongside Scott Base.

The Base has also had visitors in the form of TVNZ Breakfast reporter Jack Tame and conservation guru Sir David Attenborough. We even had a visit from a group of inquisitive Adelie penguins. This caused the entire contents of the Base to rush outside - camera happy - some even chatting “penguin” to the visitors who seemed to be just as entertained by a mass of Kiwis sporting black and orange Antarctica New Zealand jackets.

A huge thank you to Antarctica New Zealand for logistical support; to the wonderful and hospitable Scott Base staff, for allowing me to become part of the furniture; and particularly to the wonderful technical science support I’ve had over the two campaigns. And to Rob McPhail for his superb flying; I have joined a small group of New Zealanders with a t-shirt entitled “I will fly with no other”.

So, what have I missed most about home? Obviously two months away from good friends and family is an issue, but so is lack of greenery, a long soak in a bath, and going for runs along the banks of the Waikato River. Antarctica is an experience like no other with its vastness, grandeur and people. Where else do you get to have a wine with Sir David Attenborough one evening, visit Scott’s 1902 Hut the next, and learn about three-storey tall NASA balloons from top-notch NASA scientists the following evening?

. Waikato University Earth and Ocean Sciences student Tanya O’Neill is in her second year of a PhD looking at the impact human activity is having on Antarctic soils.