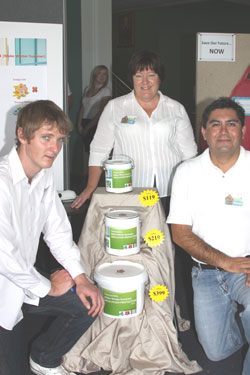 HOT IDEA: Members of the Thermoskin team created a house insulation that can be painted on. Their work was part of a summer school marketing paper at Waikato University.

Working in groups of three or four, they crammed a semester’s work into three weeks and came up with a money- saving product, a marketing plan that covered price, packaging, placement and promotion and then had to display their wares for judges. “They had to work hard and fast,” says lecturer Dr Mark Kilgour, “They’ve come up with some great ideas and learnt a lot about the realities of coming up with new products and getting them ready for market.”

Precious Mbiza comes from Zimbabwe and it was her experience of cooking meals outside that prompted the Solar Boven - a solar powered oven. With team mates John Yulo, Deena Hoyle and Bonnie Taia they took the idea and shaped it for a New Zealand market. Not a barbecue, but a lightweight compact cooker that can be transported to the beach or bush.

They added a battery pack for those occasions when the sun doesn’t shine.

Another group also initially went down the solar path, planning to develop solar panels for cars, but after much discussion the trio came up with a product called Thermoskin – a house insulation that can be painted on.

“Think how ski gear has developed,” says Marcelo Mieres who’s studying environmental planning. “It used to be big and chunky but has been refined to a thin layer that gives maximum warmth. Using that idea, we thought that rather than installing thick fibreglass or wool insulation you could come up with a gel that covered walls and gaps and enabled the house to retain heat.” Mieres’ team mates were labour studies honours student Linda Meerkerk and law student Michael Wallace.

And it was Thermoskin team that turned out to be the winner, judged by marketing department lecturers and senior marketing students. “Their attractive display and knowledge of their target market allowed them to develop a marketing plan that shone out and, as their tagline stated, ‘made winter into summer’,” says Dr Kilgour.