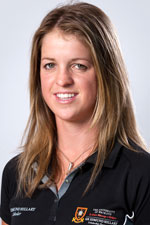 Lucy Olphert: The Hillary Scholar is studying for a Bachelor of Media and Creative Technologies.

Waikato University Hillary Scholar Lucy Olphert had the opportunity of a life time when she attended the 5th National Libyan Youth Forum recently.

The 22-year-old was one of just one of two New Zealanders invited to the forum, and the only Waikato University student that attended.

Olphert, who is a show jumper studying towards a Bachelor of Media and Creative Technologies, says she was offered the rare opportunity through a friend.

“An invitation was extended to a family that I met at an international show jumping event in Germany. They were allowed to invite a few other people and I was one of them. This is the first year that internationals have been invited to the forum.”

The National Libyan Youth Forum was established in 2006 by Dr Saif al-Islam Muammar Al-Gaddafi, son of Libyan leader Muammar al-Gaddafi. About 170 representatives of youth organisations and associations from 40 countries attended. This year’s forum theme was ‘Dialogue, Understanding and Peace.’

It was short notice for Olphert which made planning for the trip a challenge. “When I was speaking to Emirates about my ticket details late Tuesday evening I found out that my plane had left that day 5 hours before. So it all had to be re-booked for the following day and that meant going through the Libyan travel agency. This was a really challenging experience because of the language barrier. The flight agency also got my name wrong on my plane ticket so I wasn’t sure if I was able to leave the country, and the flight attendant told me that I may not be able to leave the plane if I wasn’t covered up appropriately, although I was well covered up in my thermals and Canterbury track-pants.”

Despite all this Olphert made it to the forum, met Dr. Gadaffi and says she had some incredible experiences. “The atmosphere of the conference was amazing. There were press conferences, meetings with other representatives and art exhibitions. We also saw the foundations of the man-made river project will supply water throughout the Sahara desert in Libya, and we also visited the ruins of Sabratha, near the Mediterranean coast.” 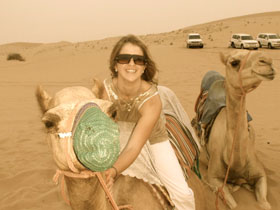 Camel Times: Olphert was one of only a few New Zealanders invited to attend the 5th National Libyan Youth Forum.

Olphert says the forum was a valuable and rewarding experience, and it gave her motivation to do more for the community. “It was good listening to young people from other places and how they are working to achieve change in the world. It goes to show that just because you’re young it doesn’t mean you can’t change things. It has definitely inspired me to get more involved.”