A versatile dancer and a world champion life-saver are the latest recipients of Waikato University Sir Edmund Hillary medals.

Claire Gray and Nikki Cox have been awarded the honour because they’ve excelled academically and in their chosen art or sport throughout their university careers, and they have also shown leadership potential. 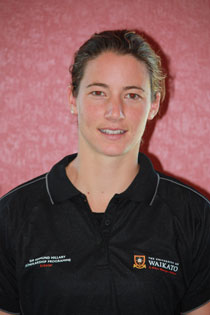 NIKKI COX: The surf lifesaver and Hillary Medallist has already secured a job with PricewaterhouseCoopers in Wellington.

Nikki Cox, Napier born and bred, completed her Bachelor of Management Studies with honours at the end of last year and has secured a job at PricewaterhouseCoopers in Wellington. She won her first international surf lifesaving title in 2006 and last year won a gold medal in the board race at the World Games in Taiwan.

“People ask me why I came to Waikato University where there’s no beach for training, but luckily most of the university year is in the off season, I can still swim, kayak and run, and Raglan isn’t far away. I came to Waikato because I liked the look of their BMS – the first year gives you a chance to study a lot of different management disciplines. Much to my surprise accounting came naturally to me and I liked it.”

Cox, 25, is one of five children who’re all involved in the sport at various levels. She sets herself goals and has religiously kept notes of her training sessions since 2001. Her next challenge is to make the New Zealand team for the next world championships in Egypt.

As a Hillary Scholar and Prime Minister's Scholar, Cox’s course fees were covered; she attended leadership and personal development workshops, had free gym membership, personal training for the gym if needed and support from the high performance managers.

And she was able to continue competing at national and international events. “I had to sit uni exams in Australia on some occasions. Staff were really good at making sure I could fit everything in. Even though the university is a big place, it didn’t feel that way, people knew me and I was well looked after.”

Alongside her medal, which will be presented at graduation this year, Nikki Cox receives $1500. 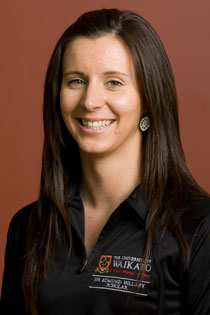 CLAIRE GRAY: The Hillary Medallist is leaving Waikato University with a Bachelor of Arts in theatre studies and Māori and graduate diplomas in human resource management and strategic management.

Hillary Scholar Claire Gray came to Waikato University from Pukekohe intending to study screen and media but four years later she’s leaving with a Bachelor of Arts in theatre studies and Māori and graduate diplomas in human resource management and strategic management, and a wealth of experience.

“I hadn’t been in Hamilton long when I went with other members of my church to a soup kitchen. It made me aware of real poverty and I decided I couldn’t ignore it.” So alongside her dance and study Gray and two other Waikato students founded became involved in Streetworks an initiative that gets people out into the community making themselves useful. “We undertake two major events a year – practical things like delivering firewood to families or cooking loads of meals for community centres to freeze.”

Gray says her management study has been extremely useful for Streetworks. “Things I was doing in class I could immediately apply to our organisation. I discovered that management study made my brain dance.”

But her passion has always been physical dance. She came to Waikato strong in ballet and jazz but once at university found contemporary dance equally to her liking.

“I’m leaving university with a broad set of qualifications. All through my years at Waikato I’ve been well supported, especially by my dance tutor Karen Barbour. It’s a real honour to receive the Hillary medal especially because I met Lady Hillary. We just sat and chatted about what I’m doing with Streetworks and what she’s doing in Nepal. She was really down to earth and encouraging. I was gutted I never got to meet Sir Ed, but meeting his wife gave the Hillary Scholarship more meaning and has made it even more of an honour to get awarded the medal.”

University High Performance Manager Greg O’Carroll says Cox and Gray have been outstanding students who’ve made a significant contribution to the Hillary programme. “Through their attitude and their actions, it’s been a pleasure to work with such committed and talented scholars. The great thing is that I know both Claire and Nikki will remain in touch with the Hillary programme and will have a role to play in the future of the programme as Hillary alumni.”