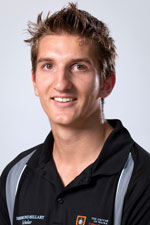 Two University of Waikato students achieved sporting success earlier this week, by gaining national and international honours. Oliver Leydon-Davis and Angela Simpson are both Sir Edmund Hillary scholars and have been recognised for achievements in badminton and orienteering.

Waikato badminton representative Oliver Leydon-Davis has been selected to represent New Zealand at the Commonwealth Games in New Delhi later this year. The Bachelor of Management student is part of an eight-player team which will travel to India in October.

The 20-year-old told the Waikato Times he was “nervous” ahead of the Games, but looked forward to New Delhi. "I'll find out when I get there. I'm a little bit apprehensive I suppose but I'm quietly confident that we can do alright over there. Obviously if we prepare well then things should be fine.”

Leydon-Davis began playing competitively when he was 14, and was first selected to play for New Zealand in the 2009 Whyte Trophy series win against Australia. Next month he will compete at the New Zealand championships, before heading to Asia and Tahiti to prepare with the Games team.

He joins fellow Hillary Scholar and Waikato University student Myles-Browne Cole who will compete at the Games for the New Zealand shooting team.

The Environmental Science student finished 36 seconds behind French winner Amelie Chataing and registered the best performance by a New Zealand woman at the event. A total of 309 participants from 31countries competed.