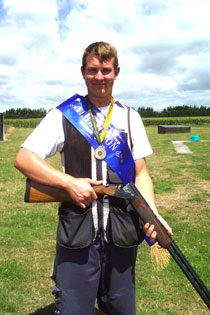 Sharp shooter: Myles Browne-Cole is heading to the Commonwealth Games in New Delhi later this year.

Sir Edmund Hillary scholar Myles Browne-Cole has been juggling the final stages of his BSc (Tech) with shooting commitments and the good news is he should finish his degree in mid-August, giving him plenty of time to prepare for October’s Commonwealth Games in New Delhi.

Twenty-two year old Browne-Cole has been doing the final nine-month practical part of his degree which sees him living in Palmerston North and working at AgResearch’s Grasslands campus.

But this has not slowed down his sporting commitments and since the beginning of the year he has been to Australia (where he was the first outsider to ever win the Australian National ISSF Trap shooting title), to Italy (where his score of 114/125 at the World Cup event was enough to meet the international MQS for the 2012 Olympics), and he’s been travelling up and down the North Island to take part in regional and national events. In late July he heads to Germany to represent New Zealand at the World ISSF Championships.

“There’s nothing like competition to help you pick up your game,” says Browne-Cole. “Shooting is about consistency and maintaining good technique under pressure, and competitions help you develop that skill, plus you have to adapt to whatever the weather throws at you.”

Once he wraps up his degree and until he leaves for the games, Browne-Cole will head home to Pukekohe where he plans to help his father out in his businesses in between travelling to Hamilton to train at the Waikato Clay Target Club.

He’s one of two male clay target shooters picked for New Delhi and he’ll compete in the two-man and individual events.

He says once the games are over he’ll have to think about getting a job in earth sciences - or maybe enrol in a masters degree. “Waikato’s been good for me. I picked up a Hillary Scholarship at the start of my second year and that made life a lot easier financially. Right through, my lecturers were pretty understanding about rearranging exams and giving me extensions when I was away competing. Oceania champs always seemed to clash with B Semester exams so a bit of shuffling was required.”

Hitting the target is licensed under a Creative Commons Attribution 4.0 International License.