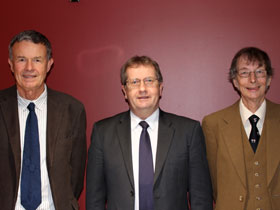 Drs Derek Smith and Lyndsay Main were acknowledged for their outstanding careers in chemistry research, teaching, administration and leadership.

Dr Main came to Waikato in 1972 when the Chemistry Department was new, Dr Smith came in 1973. Dr Main had an MSc from Victoria and a doctorate from Auckland, and as the recipient of a Fulbright Travel Award had carried out postdoctoral research at the University of California, Santa Barbara.

Dr Smith also arrived with impressive credentials. After obtaining a first-class honours degree from the University of St Andrews in 1965, he embarked on his DPhil at Oxford University as a Senior Scholar of St John’s College.

In 1969, he was awarded an ICI fellowship for post-doctoral research at the University of Sheffield, where he subsequently lectured before taking up a position at Waikato as senior lecturer in inorganic chemistry.

Dr Smith worked closely with Emeritus Professor Kenneth M Mackay in developing inorganic, theoretical and analytical chemistry and spectroscopy. From the start, his teaching reflected his commitment to the very highest standards of scholarship, and his impressive research contributions demonstrated an exemplary academic rigour.

During the course of his career at Waikato he was promoted to Reader and then Associate Professor, and also served as departmental chairperson between 1986 and 1992.

Dr Main also climbed the ranks to Associate Professor and served as department chairperson for four years. During his 38 years with the Department, he was responsible for setting up and organising the teaching of organic chemistry, the largest sub-discipline in the subject, and for the introduction of successful papers outside his specialist subject too, from first year to MSc level.

He had a reputation for being conscientious and meticulous, for having enormous empathy with his students, and for always being scrupulously fair in his assessments.  He supervised 15 PhDs and 37 Masters of Science theses.

Early fundamental discoveries in the field of physical organic chemistry underpinned his more recent applied work. One major research project, jointly with Professor Brian Nicholson, focussed on the use of metal re-agents in organic synthesis and recently he’s collaborated with the Cancer Research Laboratory in Auckland to advance the design of pro-drugs, ones that specifically target cancer cells. With HortResearch he’s collaborated to design molecular sensors.

Professor Roy Crawford said the contribution of Drs Main and Smith helped ensure the University of Waikato was ranked top in New Zealand for chemistry in the last two Performance-Based Research Fund assessments.