Honours for lifetime of coastal work 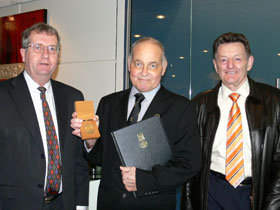 Coastal scientist Professor Terry Healy’s work has been acknowledged with a Queen’s Birthday honour, a University of Waikato Medal and a life membership of the NZ Coastal Society.

Professor Healy was made a Member of the New Zealand Order of Merit in the June 7 Queen’s Birthday Honours. Just days before, the University held a ceremony to present Professor Healy with a University of Waikato Medal. And on May 30, a dinner was held in Hamilton where Professor Healy, 65, was honoured by the cream of the coastal management industry with a life membership of the NZ Coastal Society.

Widely regarded as New Zealand’s pre-eminent coastal scientist, Professor Healy is only the third person – and the first scientist - to be awarded life membership of the Society, which is a technical group of the Institution of Professional Engineers New Zealand and represents a wide range of coastal science, engineering, management and planning disciplines.

Deputy Vice-Chancellor Professor Doug Sutton says the three honours for Professor Healy, who is very ill, are an important recognition of a lifetime of work. Professor Healy has researched coastal erosion, sedimentation and hazard management, including tsunami, and applied his environmental expertise to port and marina developments around New Zealand.

Since his elevation to professorship in 1990, Professor Healy has built the University’s Coastal Marine Group into the leading research group of its kind in a New Zealand university. His professorial Chair, sponsored by the Port of Tauranga Ltd since 1990, was the first Chair in Science to be sponsored by industry in New Zealand. He is also Adjunct Professor at Nanjing University, China, serving in that role since 1995.

He is the major driver behind the New Zealand and Germany INTERCOAST initiative, and his research has helped port and regional authorities across New Zealand to run their operations efficiently and maintain the environmental health of harbour and coastal environments.

In the 1980s his cutting-edge advocacy for using knowledge of tides and currents to dump sand dredged from navigation channels in order to build adjacent beaches is now a commonplace strategy. He is particularly credited with making a significant and ongoing contribution to the sustainable growth of the Western Bay of Plenty economy.

International recognition for his work includes acknowledgement as a “Top 100 Scientist” by the International Biographical Centre, Cambridge, UK. He was the first New Zealander to receive the Alexander von Humboldt (AvH) Foundation Preistrager Award in 1997, and he has a string of other fellowships to his name.

Since 1989 Professor Healy has been a Director of the US-based International Coastal Educational Research Foundation. He has also served as Vice-President of the Scientific Committee for Oceanic Research of the International Council of Science, UNESCO.

In New Zealand he has been a leading member of the Royal Society, and has served as New Zealand’s primary advisor to Civil Defence on tsunamis. In 2003 he was elected a Fellow of IPENZ – only of only a select few non-engineering graduates to be accorded the honour.

Professor Healy has a prodigious publication record, and has won 150 research contracts totalling more than $10 million, and has led 21 major projects and expeditions including two to the Antarctic.

During the 1990s when coastal issues became very important under the Resource Management Act, Professor Healy’s third year paper on coastal processes and management became the largest in the School of Science. He says his main forte is supervising student research, and that he encourages his students to treat him like “a sports coach.” He has supervised 119 students undertaking research at masters and doctoral level.

He counts his body of work over 36 years for the Port of Tauranga as his greatest achievement but says he wants to be remembered for his exacting work over many years to support graduate and postgraduate student researchers to achieve their goals.