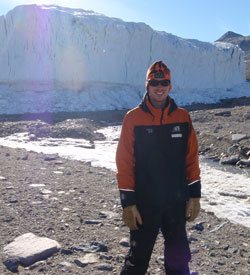 Summer in Antarctica was warmer than Waikato University masters student Stephen Archer had expected and he found he was better prepared than he needed to be. Archer spent almost a month on the ice this season and says the heating element and insulation that he put into his sampling rig to keep his samples from freezing wasn’t needed.

Archer is studying planktonic communities in meltwater ponds and was awarded a Waikato University masters research scholarship of $12,000 and a New Zealand Post Antarctica New Zealand research scholarship to go to Antarctica to collect samples. “I’d built myself a sampling rig with a special heating element which I didn’t need as as the weather wasn’t extreme enough for me to use it. I’d also built a micro manipulator, which is like a really accurate winch, accurate to a quarter of a millimetre, accuracy we didn’t end up needing.”

But it was still cold enough for his samples to freeze before he could get them back to the science hut to process them. His samples have been brought back to Waikato for analysis. “You can’t see these life forms with the naked eye, but they’re important for our understanding of what organisms live where and to monitor their differences and development in different environments.” He collected samples from ponds of different sizes and depths, with names such as Egg, Orange, Salt and P70. Archer worked 14 hour days on Bratina Island to get his work done and once he’d collected his own samples was able to assist on other projects.

Based mostly in the Miers Valley, he assisted on several projects with scientists from Waikato and other New Zealand universities, the US, Hong Kong and Australia.

“On one American project we built a little dam and diverted a stream. The aim was to see how populations change in areas that haven’t seen water before. Other projects involved studying the micro-organisms under mummified seals, invertebrates and DNA longevity.”

For Archer it was a once in a lifetime opportunity to work with so many experts on great projects in a unique environment. “The views were breathtaking – imagine waking up, opening the tent and there in front of you are two glaciers. From a practical point of view, I’m glad the conditions are better now than they were for the first explorers. Even so, out in the field there’s no running water, no flushing toilets and I went without a shower for two weeks.” 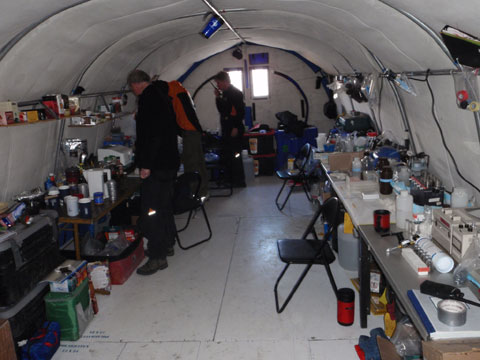 TENT CITY:Polar Haven in the Miers Valley in Antarctica - a large deluxe tent set up for scientists working on the ice.