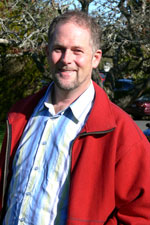 An innovative idea for iwi to turn waterweed into energy has won funding from the Foundation for Science, Research and Technology worth $107,500 over three years.

University of Waikato PhD student Shane Carter, has been awarded a prestigious Te Tipu Pūtaiao Fellowship to fund his research aimed at developing sustainable technology to anaerobically digest waterweed and utilise the energy created during the process.

“It’s about turning waste into a usable resource in a way that’s cost-neutral or even profitable,” says Carter, who’s also a consultant in waste and energy management and efficiency.

“Waterweed is a major problem in many waterways, and weed control is a costly exercise. So instead of planting biofuels, why not harvest the waterweed and put it through a methane digester to create a sustainable energy source for marae, kōhanga reo and kaumātua housing?”

Carter has been working with a US company on ways to harvest and process waterweed, and is confident he can overcome any technical problems with the anaerobic digestion process. “It’s simply a matter of putting the waterweed together with bacteria in the right way and turning it into a methane gas that you can burn. The remaining sludge can also be used as a fertiliser on the land.”

The interesting bit from an engineer’s perspective, he says, will be setting up a small-scale processing operation, and he’s currently consulting with Te Arawa and Waikato tribes to see how weed harvesting might work in with their waterways management plans in the Waikato River and Rotorua Lakes catchments.

“Environment Bay of Plenty works closely with the Te Arawa Trust to control waterweed as part of managing Rotorua Lakes’ nitrogen levels. Last year, they removed more than 3,000 tonnes of waterweed and sent it to landfill. So if you take that weed and calculate its energy potential, you’ve got the basis of a lucrative little business that would remove waste weed, create energy and fertiliser, and create employment.”

Carter is now distributing questionnaires to solicit the views of iwi in the region on the project.

“The TTP funding aims to utilise technology that makes use of Māori principles, so it’s important this project is a two-way process,” says Carter. “I’ve worked with Māori previously on iwi-based waste management projects, and Māori views are way ahead in terms of the environment. And while anaerobic digestion is still a fringe technology, it is becoming more mainstream.”

TTP Fellowships aim to unlock the innovation potential of Māori knowledge, resources and people for the benefit of New Zealand. They are available annually to students completing a Masters degree, doctorate or postdoctoral work in a science, engineering or technology discipline.