Intercoast welcomed to Hamilton and Tauranga

A major international research project has officially started, with welcomes for the Intercoast team at the University of Waikato in Hamilton, and in the Bay of Plenty.

The Bremen University and Waikato University project, driven mainly by Waikato's Professor Terry Healy and Bremen's Professor Dr Gerold Wefer, began on February 9 with a pōwhiri at the Hamilton campus. That was followed by a pōwhiri at Whareroa Marae in Mt Maunganui and a function in Tauranga hosted by the German Embassy. The Bay of Plenty region will benefit hugely from the research work that will be done by the Intercoast project. 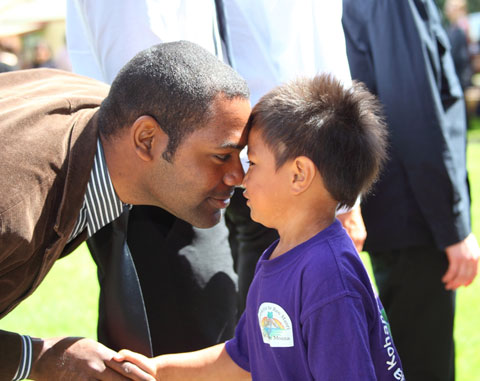 BIG DAY: A young member of Whareroa Marae welcomes one of the Intercoast research students. Over nine years, 39 PhD and post-doctoral fellows will visit the Bay of Plenty region to work as part of the Intercoast programme.

Waikato and Bremen already run a joint Masters of Science programme, but Intercoast is first project to come out of the New Zealand-Germany Science and Technological Agreement and the first Australasian science collaboration for the University of Bremen. Bremen has one of the world's top oceaonographic institutes.

Intercoast stands for integrated coastal zone and shelf-sea research, and the programme sees top scientists from the two universities, the Port of Tauranga, Environment Bay of Plenty and Priority One putting their support behind the project. The German Government's Science Foundation has pitched in with several million dollars. 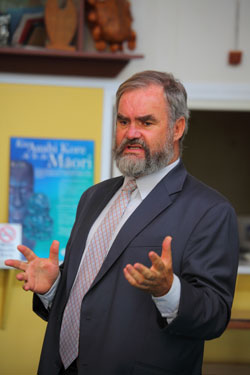 Over nine years, nearly 40 international PhD students and post-doctoral fellows will research the Bay of Plenty coastline and aspects of the North Sea. This first visit is an opportunity for international participants to familiarise themselves with the region and meet key academics and industry representatives involved in the multi-disciplinary (science, law and social science) programme. They have 10 days of workshops planned.

One of the programme's biggest supporters has been University of Waikato Deputy Vice-Chancellor Professor Doug Sutton. He says Intercoast is a major international initiative that will have direct benefits for industry, local bodies and the residents of the Bay of Plenty.

The research projects have been developed with input from Environment Bay of Plenty and the Port of Tauranga, and include impacts of harbour development on ecosystems, protection and utilisation of harbour and coastline, management of shared and migratory fish stocks, sediment studies and habitat dynamics, and opportunities for open ocean aquaculture.

Prof Sutton paid tribute to Prof Healy's work on Intercoast, saying Prof Healy and Prof Wefer first discussed the possibility of this joint initiative as far back as the early 90s. Prof Healy describes Prof Wefer as a 'super star' in his field and who has spent time at Waikato University as a prestigious Julius Von Haast Fellow, funded by the Ministry of Research, Science and Technology. 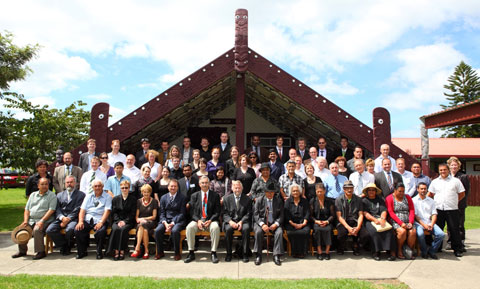 TEAM WORK: The Intercoast team at Whareroa Marae. The Bay of Plenty region will benefit hugely from Intercoast, the international research project.