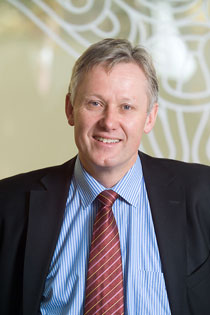 The Founding Chief Executive of Kiwibank, Sam Knowles, is to be honoured by the University of Waikato for his outstanding record of public and corporate service.

Mr Knowles is one of three alumni to be given Distinguished Alumni Awards on August 27 at a university function hosted by the Chancellor, former Prime Minister Jim Bolger, and the Vice-Chancellor, Professor Roy Crawford.

“Kiwibank grew out of the idea of a locally-owned ‘people’s bank’, but it was Sam Knowles who turned the idea into a reality,” said Professor Crawford.

“As the architect of Kiwibank, he has made a lasting contribution to the New Zealand banking industry and to the wider community. This achievement coupled with his outstanding leadership qualities makes him truly a distinguished alumnus of the University of Waikato.”

Mr Knowles graduated from the University of Waikato in 1975 with a Bachelors degree in science. After completing a Masters degree with honours at Canterbury, he entered the Treasury in 1983 where he worked on environmental and other reforms for the new government.

A move into banking followed, with stints at the Bank of New Zealand and then the National Bank of Australia. His first appointment as a CEO was in 1999, when he set up “At Work Insurance”, a state-owned enterprise competing with ACC in the newly-privatised workplace compensation market.

The renationalisation of ACC prompted a call from NZ Post, where Mr Knowles was asked to look at the feasibility of setting up a locally-owned national bank to provide a cheaper alternative to the larger banks.

Kiwibank was launched in 2002 despite widespread scepticism. Eight years on, it has become one of the fastest-growing businesses in New Zealand with a customer base of more than 700,000.

Director of Development Christine Brabender says the awards were introduced to celebrate the achievements of the university’s most successful alumni and to demonstrate the heights Waikato graduates can reach.

The other two recipients this year are Dr Craig Nevill-Manning, founder and director of Google’s software engineering centre in New York, and leading businessman Lt Col Tenby Powell. All three recipients will be presented with a limited edition cast-glass figure created exclusively for the award.