Law firm given strategy for growth

To achieve its goal of going national, Hamilton law firm Tompkins Wake should specialise in commercial and agricultural law and expand its services to Taranaki, Wellington and Canterbury.  That’s what senior strategy students have recommended for the firm at the Waikato University Management School business case competition.

Four teams competed in the case competition final, chosen from 22 teams and the winning group called itself The Strugglers. The five students developed a strategy that called for Tompkins Wake to diversify, develop and dominate.

They’d do this by specialising, merging with another firm from outside the city that focussed on commercial and government law, tout for agribusiness clients at major events such as Fieldays and A and P shows and make more efficient use of technology to liaise with clients, especially in remote regions.

The team of Joseph Gethen, Michael Hall, Daniel Jaques, Hannah O’Brien and Leah Pavitt also tackled the issues law firms have with young lawyers leaving to do their OE. They recommended developing relationships with international law firms in London and the US so their staff could go overseas, work and gain international law experience and then return to take up positions again with Tompkins Wake in New Zealand.

The students also recommended Tompkins Wake up their profile by having a representative on the New Zealand Business Excellence Foundation and sponsoring categories in its awards.

By 2022 The Strugglers planned to have Tompkins Wake offices in Taranaki, Wellington and Canterbury and become the first national law firm with a head office in Hamilton.

Richard Rowley, CEO at Tompkins Wake said opening up his organisation to young and enthusiastic students had been an interesting and rewarding exercise.

“We do want to be the first national law firm based in Hamilton and do have a strategy in place that’s driving this. So to hear the students’ strategies was great. Some of their ideas we’re doing already, some we’ve already rejected for various reasons, but they also presented ideas we’d never thought of and we’ll certainly be discussing them back in the office.”

For the students, the twice-yearly case competition is an opportunity to put all the management theory they’ve learnt into practice. “You learn so much doing something like this,” says Leah Pavitt who’s majoring in economics and strategy.

“It’s hard work, we’ve spent hours and hours in the computer labs and at each others’ houses. You have to come up with workable strategies and desirable outcomes, analyse potential threats and decide how to overcome them, do timelines and costs. Now it’s all over I can say it was a lot of fun.”

The Strugglers won $2,500 in the Telecom sponsored event. The judges were Margaret Wilson – law professor and former Attorney General and Speaker of the House, Graham Naylor – a partner at Deloittes and Michelle Kong from Telecom. 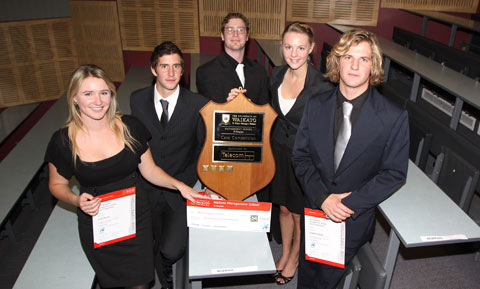