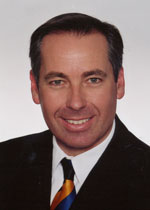 Business leader and long-serving army officer Lt Col Tenby Powell is to be honoured by the University of Waikato for his entrepreneurial talents and leadership.

Lt Col Powell is Director of Hunter Powell Investments, and the entrepreneurial force behind the success of the New Zealand Rental Group – which he grew from humble beginnings into a rental equipment leader with 84 business units across the country. His military service includes a tour of duty with UN peacekeeping forces in the Middle East.

He is one of three alumni to be given Distinguished Alumni Awards on August 27 at a university function hosted by the Chancellor, former Prime Minister Jim Bolger, and the Vice-Chancellor, Professor Roy Crawford.

“Lt Col Tenby Powell’s stellar achievements, spanning the business sector and the military, have made a substantial contribution to New Zealand through wealth and job creation,” said Professor Crawford. “His outstanding leadership qualities make him truly a distinguished alumnus of the University of Waikato.”

Lt Col Powell graduated from Waikato with a Bachelors degree in 1987, and held senior management positions at Fletcher Challenge and the Skellerup Group Ltd (which became Viking Pacific Group).

He set up his own company Hunter Powell Investments in 1998, and through a series of acquisitions, new branch developments and alliance partnerships created the New Zealand Rental Group, now the country’s leading rental equipment provider, including cornerstone business Hirepool together with Port-a-Loo, Henderson Rentals, Rhodes Rentals, Barricading Solutions and Hirepool Access.

His military service in the New Zealand Army regular and reserve forces spans 27 years, including a posting as Deputy Commander of a UN mission in Lebanon in 2001-2002.

Lt Col Powell recently announced his candidacy for the Auckland city council elections. He currently serves on the Board of Antarctica New Zealand, and co-chaired the 2009 Entrepreneurial Summit, a gathering of New Zealand’s top entrepreneurs aimed at generating ideas to jumpstart the economy during the global credit crisis. Earlier this year, he completed the Advanced Management Programme at Harvard Business School.

Director of Development Christine Brabender says the awards were introduced to celebrate the achievements of the university’s most successful alumni and to demonstrate the heights Waikato graduates can reach. “Past recipients have included Solomon Islands Prime Minister Dr Derek Sikua and Lt Gen Jerry Mateparae, Head of the New Zealand Defence Force, as well as several other impressive awardees,” Ms Brabender says.

The other two recipients this year are Kiwibank founder Sam Knowles and Dr Craig Nevill-Manning, founder and director of Google’s software engineering centre in New York. All three recipients will be presented with a limited edition cast-glass figure created exclusively for the award.