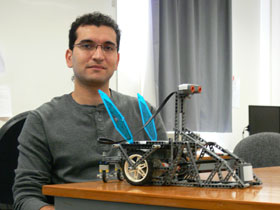 A Waikato University student has designed the perfect tabletop guardian, a robot which can detect and destroy a foreign object entering its territory – the table.

Electronic Engineering students have created numerous inventions in the 10-year history of the Mechatronics Cup competition. This year, they were tasked with designing a tabletop robot out of Lego. They had to programme the robot to detect an object and knock it off the table, without toppling to the ground after it.

The competition, which is part of a fourth year paper in mechatronics, requires the students to apply the skills they have learned over their past three years of study. “The students are essentially showcasing their knowledge of how to make computer-controlled electronic objects,” says Dr Howell Round, at electronic engineering lecturer at Waikato University.

“While you might not think a table-top robot has any application, it shows the students’ knowledge of how to design and implement electronic objects. That knowledge means our graduates work in a range of fields, for companies such as Fisher and Paykel Healthcare, Gallaghers and Tru-Test.”

Hassan, who is studying towards a Bachelor of Engineering honours degree majoring in electronic engineering, used common sense to design his robot, rather than looking at already existing designs.

He says it was a combination of his electronics skills for the optical and ultrasonics sensors, mechanical knowledge for the motors and gears, structural engineering skills, and also computer software knowledge to determine the robot’s behaviour that enabled him to come up with the winning robot.

“Ahmad’s robot was extremely structurally sound.” says Dr Round. “His robot was very long with all the weight at the back, allowing it to be very balanced when knocking the object off the table. This unique approach complemented the electronic component of his design nicely.”

“Winning the cup made me very happy,” says Hassan, who was so busy preparing for the competition he had very little sleep in the days leading up to the competition.  “It taught me that anything is possible with hard work and dedication.”

Hassan is finishing his degree at the end of the year, and is considering future study. He would eventually like to follow a career in one of his fields of interest: optoelectronics, which deals with hardware that converts electrical signals to visible infrared light or vice-versa, such as LEDs; mechatronics, which combines the fields of both electronic engineering and mechanical engineering; and medical imaging.

Winners of the Mechatronics Cup are students who excel and are usually in high demand after graduating. The eight students in this year’s competition showed a high standard of electronic skills, says Dr Round.

The Mechatronics Cup competition was created in 2000 for final year electronic engineering students. It's the last in a series of assignments and requires them to apply their knowledge to build and programme an electronically-controlled mechanical device of their own design to perform a specific, complex task.